…were just a few of the things that got in the way of progress being made this week!  David sent me a text to say he wouldn’t be with us on Monday or Tuesday as he had a funeral to go to and then would be taking advantage of the dry weather to get his sheep clipped.  And you can see why; it was gorgeous. 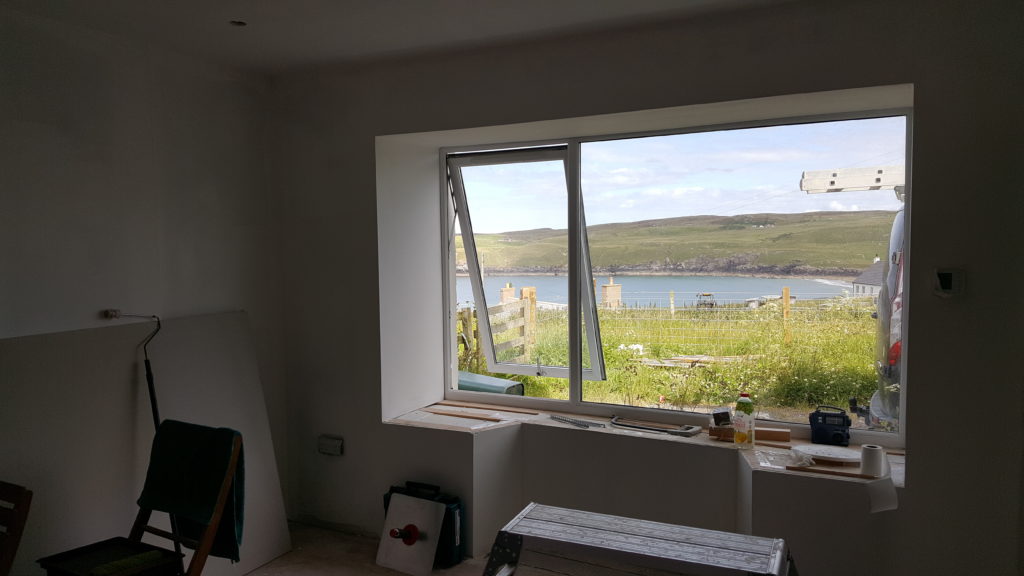 So Mick and I cracked on and got the kitchen walls primed.  Because we’re painting straight onto plasterboard, which drinks paint like someone who’s been lost in the Sahara, we decided to put on two base coats of diluted matt white as an undercoat. 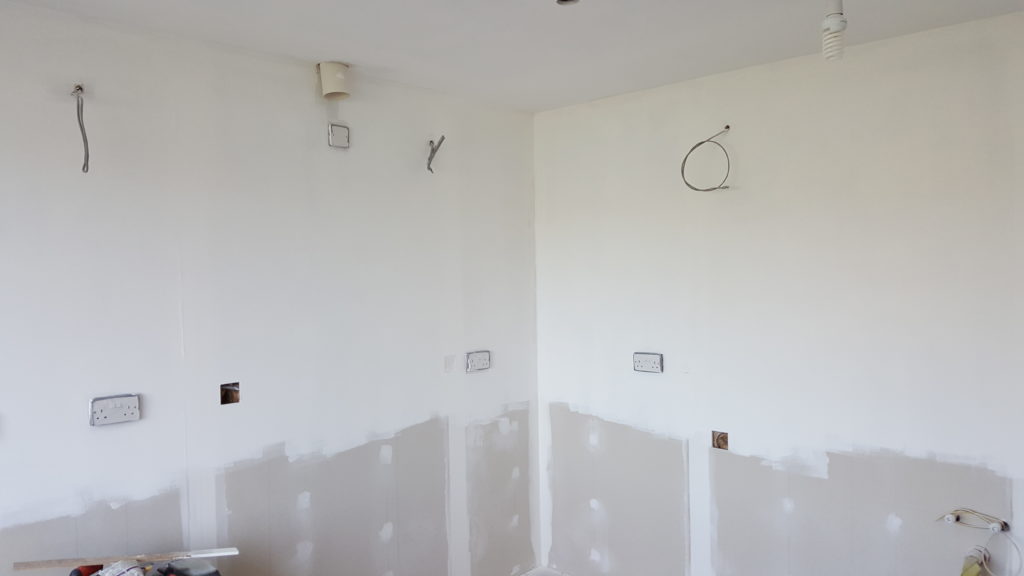 Pete turned up as well, hoping David would be there to build the frames for the concrete skews on the byre roof, and ended up lying on his back in the living room fireplace making a template for the register plate that will sit around the flue.  He and Mick went and fetched the stove from the annexe at home and lugged it into place. 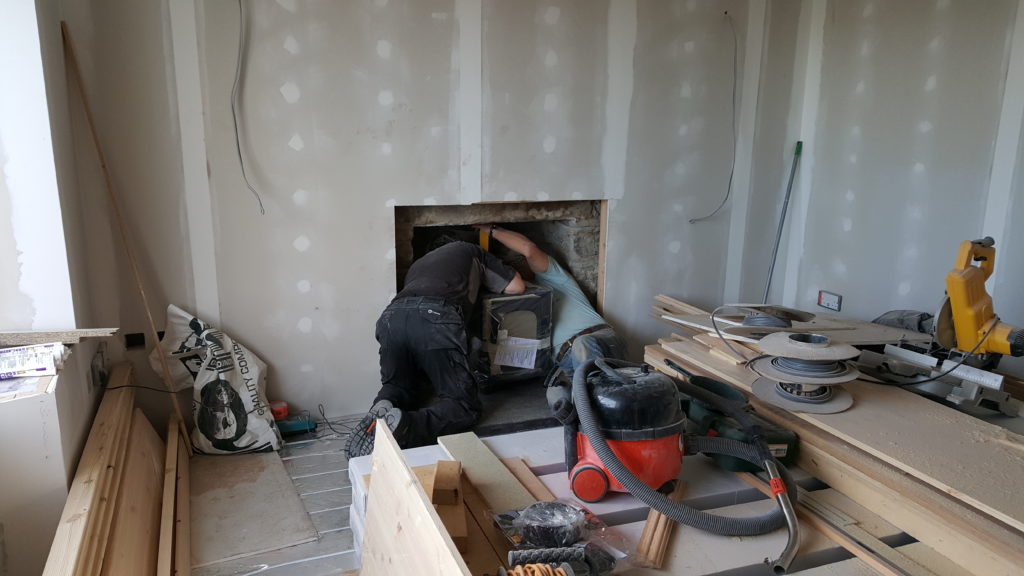 The kitchen appliances were delivered on Tuesday and I lost even more space in my office!  (Apologies – sideways pictures again, but it took me six attempts just to get them to upload this evening and it’s nearly 11pm, so I’ll try and fix them in the morning!) 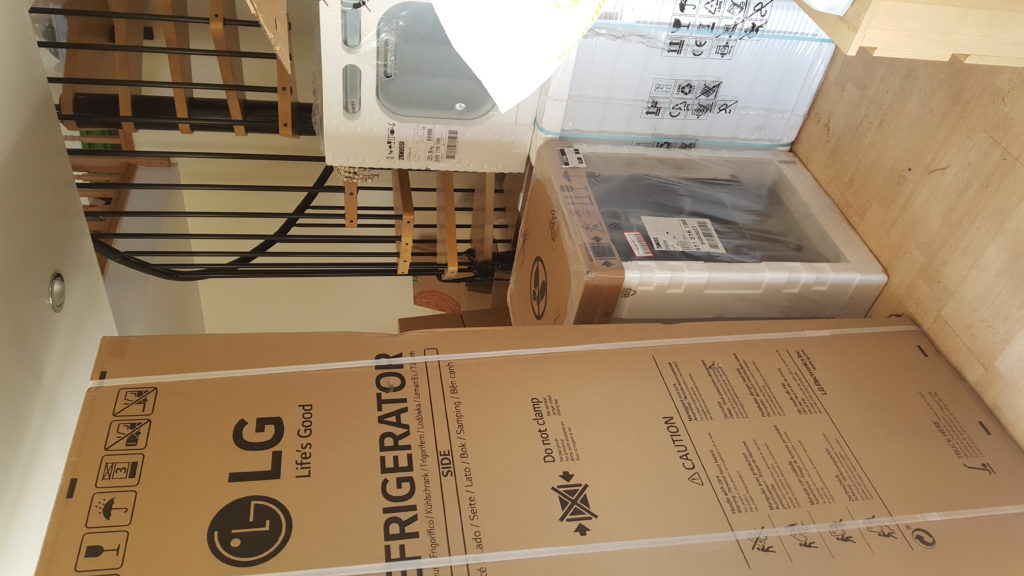 By Wednesday Mick was looking half dead, but had still been talking about cancelling his car service and carrying on working on the house instead.  I put my sternest voice on and packed him off to Inverness, on the grounds that we needed a 45-degree connector from the back of the stove to the flue which he could pick up from the wonderfully-named Bonk & Co while he was down there.

David arrived back after shearing 135 sheep and finished the landing cupboard and the upstairs windowsills. 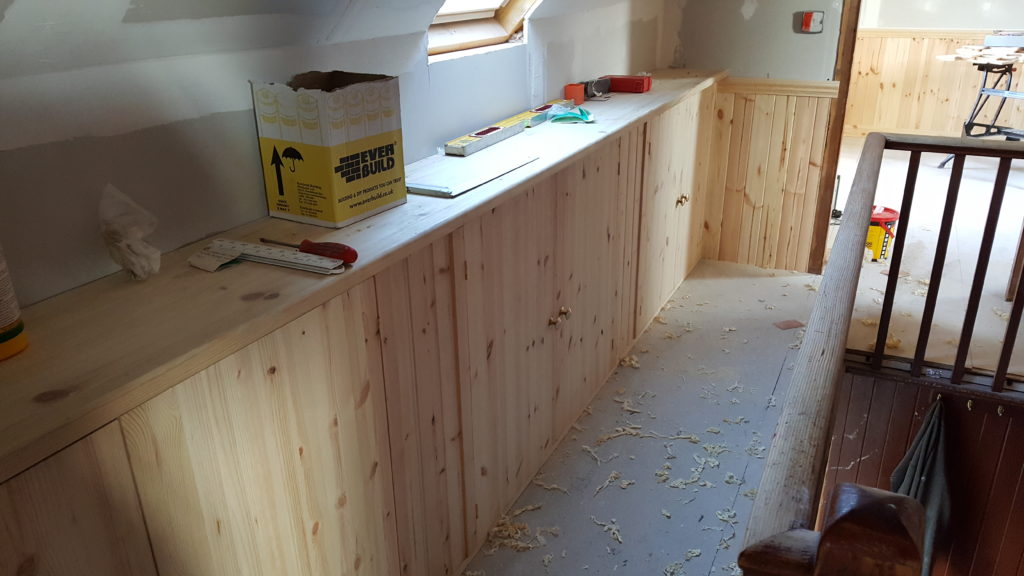 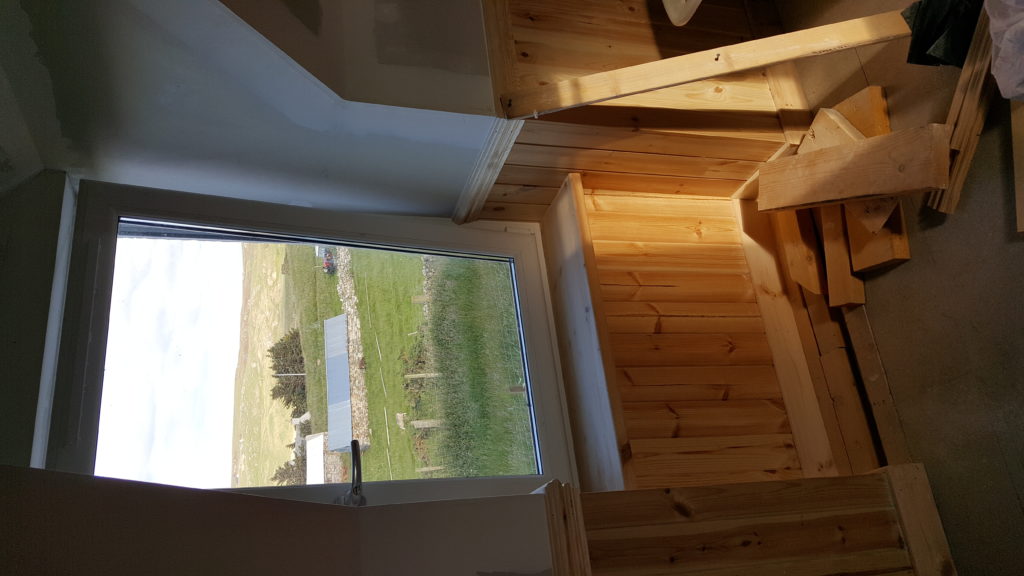 And finally, on Wednesday afternoon, the first colour started to go on the walls in the kitchen! 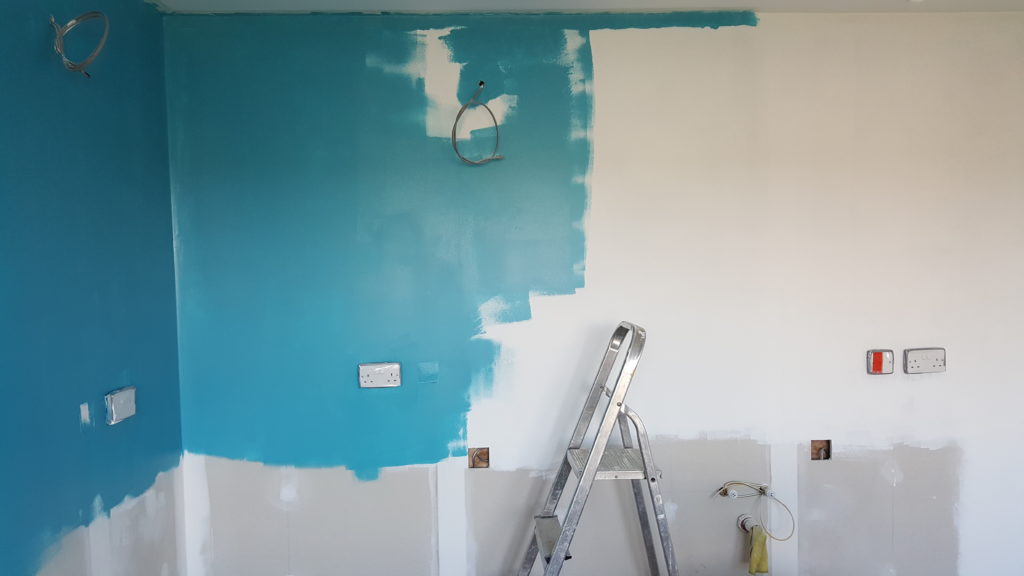 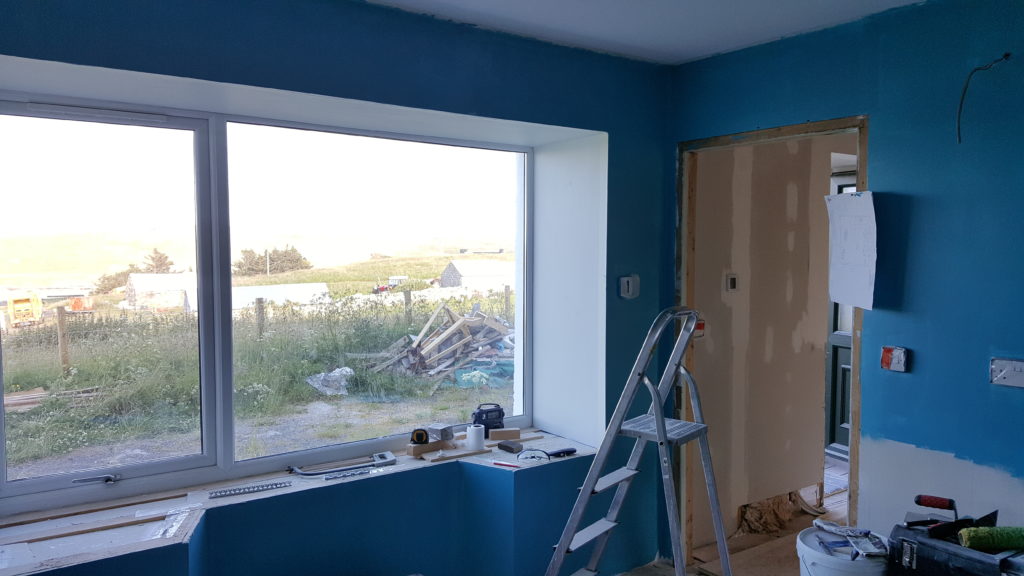 (And yes, there was some fairly creative language when my roller slipped and this happened!) 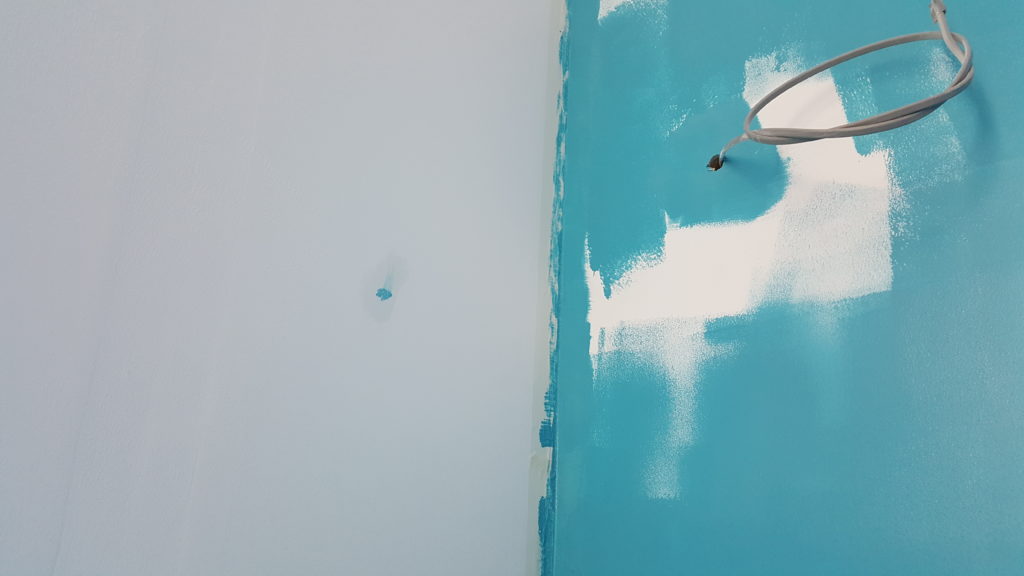 Annoyingly, I ran out half a wall before finishing, so Mick zoomed into town first thing on Thursday morning and picked up another two cans, because it needed a second coat.  It looked pretty good when it was done. 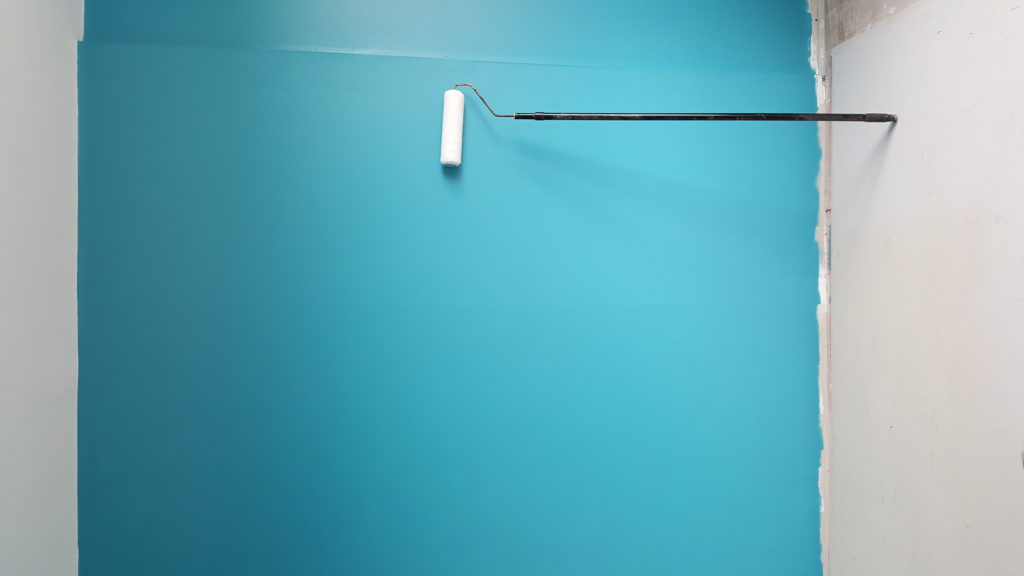 I got going with painting the bathroom and was a bit surprised to open a tin of ‘Platinum’ and find this: 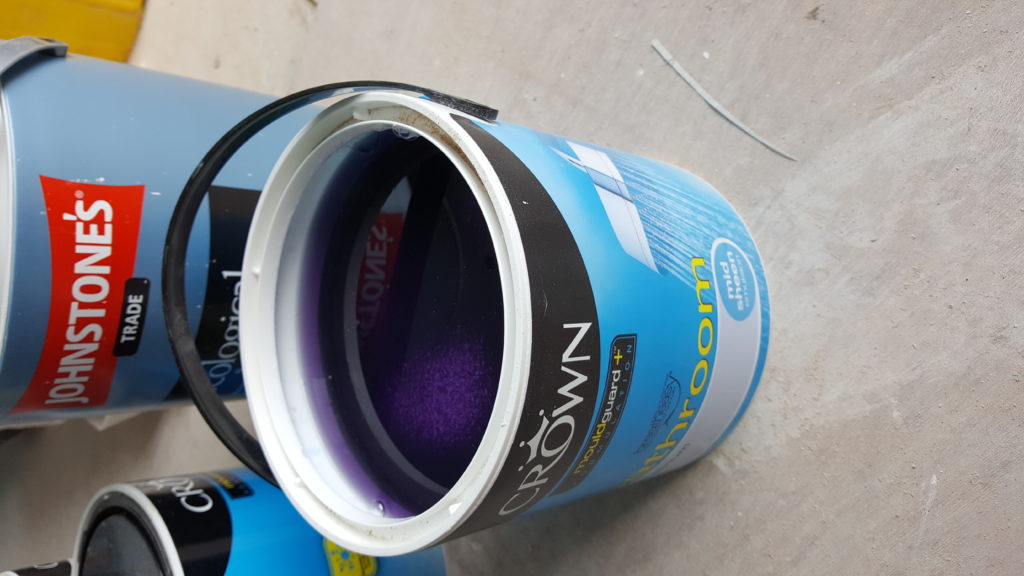 But fortunately it stirred up to the correct colour.  (‘Tin Bath’, the other bathroom colour, is sparkly blue before stirring). 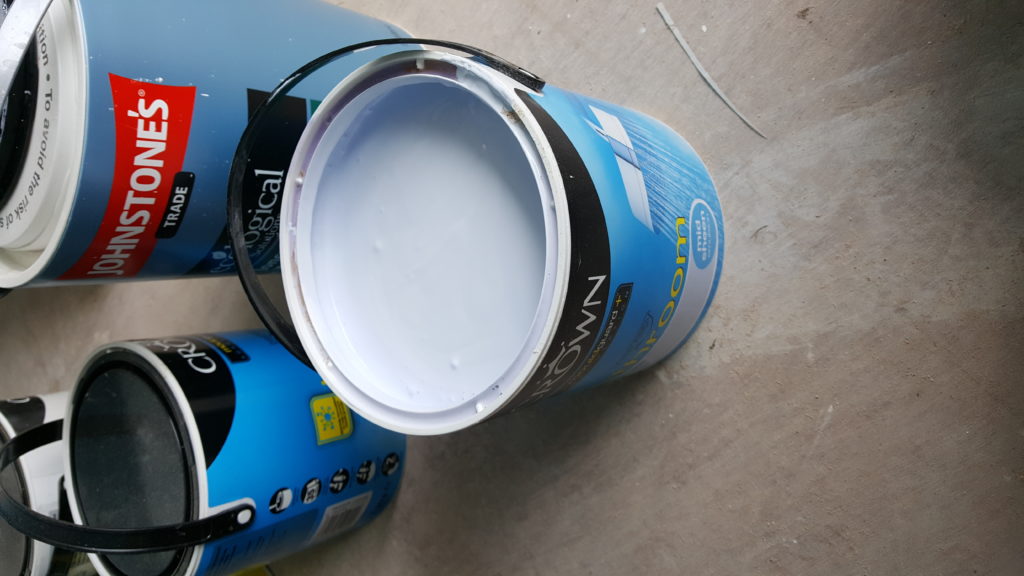 David carried on with windowsills and Velux frames. 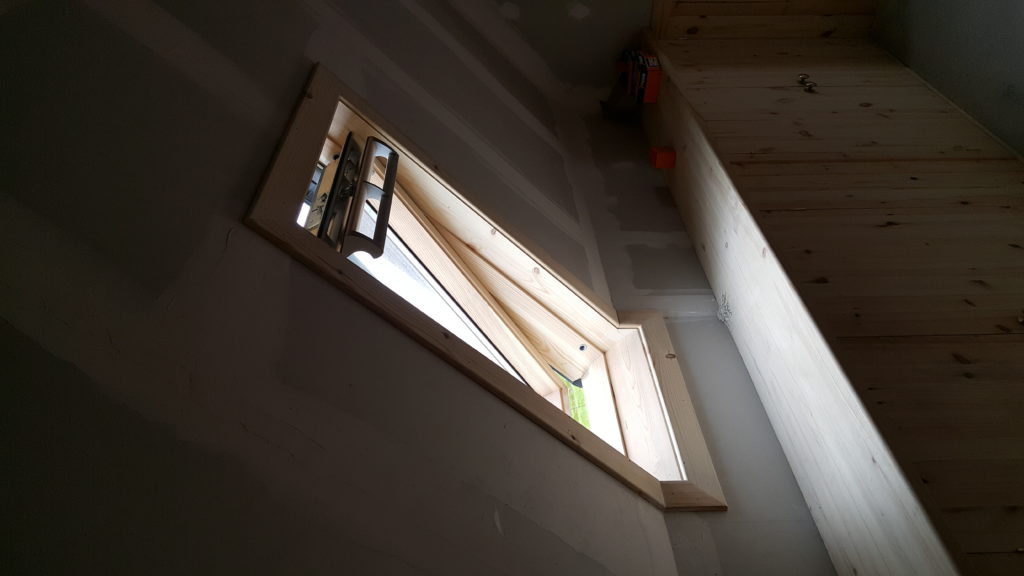 And then somehow it was Friday and time for the kitchen floor to take shape.  We took off the thin layer of chipboard that had been protecting the underfloor heating insulation from getting too squashed and had a good vacuum up.  Given we’ve been walking around on this for six months it’s in pretty good shape. 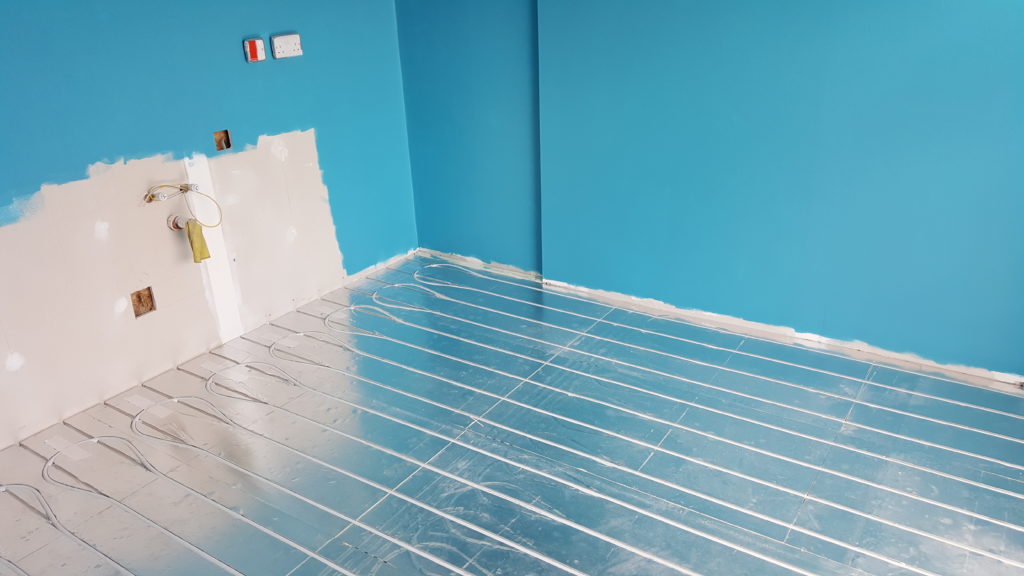 Finally, on Friday afternoon, David was able to get started on the floor, and it looks wonderful. 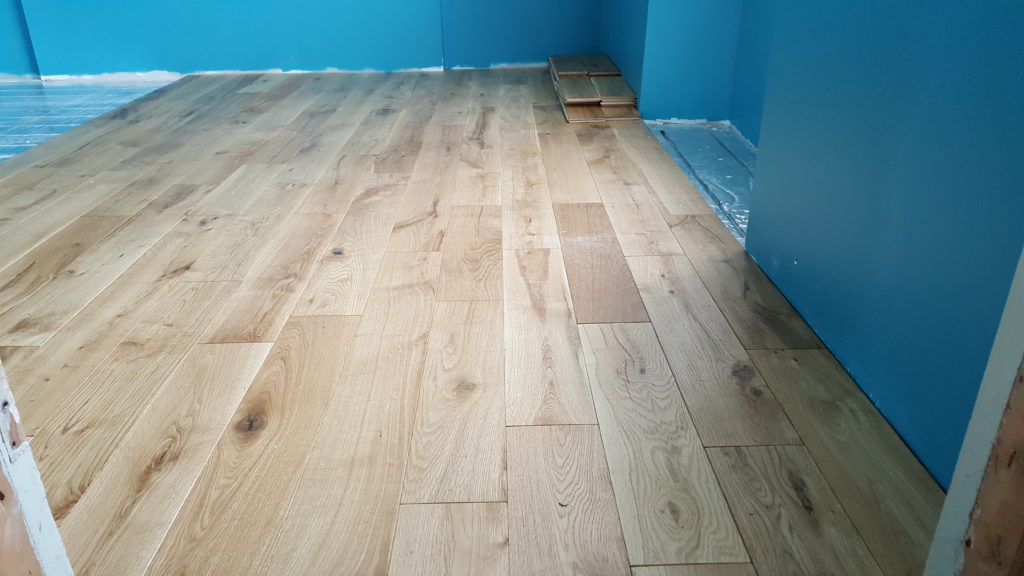 Also happening this week, Magnus came to give our house a new coat of masonry paint as well as doing all the woodwork for us, and it looks amazing. 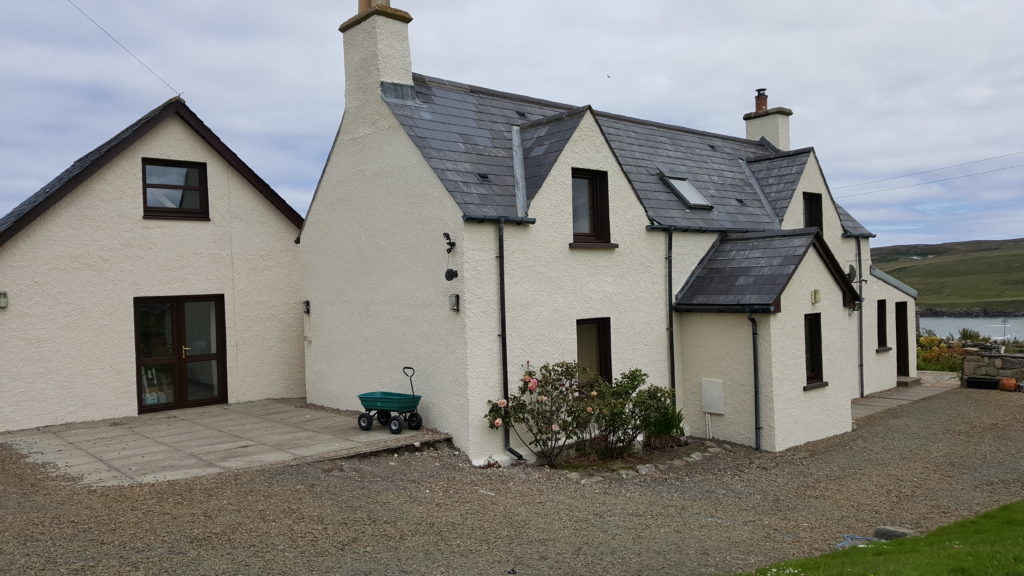 We went into Riverside Replicas and ordered the sofas, but there’s been a slight hiccup with the rest of the furniture – the range I’ve chosen for the bedrooms is being discontinued shortly and the manufacturer doesn’t have enough stock to meet my order.  We’re waiting for details of the replacement range, but the bits they’ve seen look very similar.  As long as the headboards on the beds are 115cm or lower, it should be okay.

Today should have been another full-on blitz down the road, but we had a sheep to drop off at the auction mart for tomorrow’s sale (so all of my very observant readers who were wondering why the post title refers to 136 sheep but David only sheared 135 can now relax – here’s the extra one!).  This involved taking our little flock from the field, down the village road to the communal fanks, putting them through the shedder to separate out the one being sold (a shedder is a small gate in a narrow run – a race.  Only one sheep at a time can fit down the race and when the sheep you want to separate comes up, you open the shedder gate, it shoots off into a separate part of the fanks, and then you close it again and the rest of the sheep go through the race as normal.  Timing is everything!) and then taking the others back home and getting the single one into the trailer and driving her the 35 miles to the mart.

It was 2pm by the time we’d got back and had a quick sandwich, so Mick tackled our jungle of a lawn, which had been running riot for a fortnight, and I went back down to give the living room and hall ceilings their top coat of white and put the second coat of colour on the bathroom accent wall. 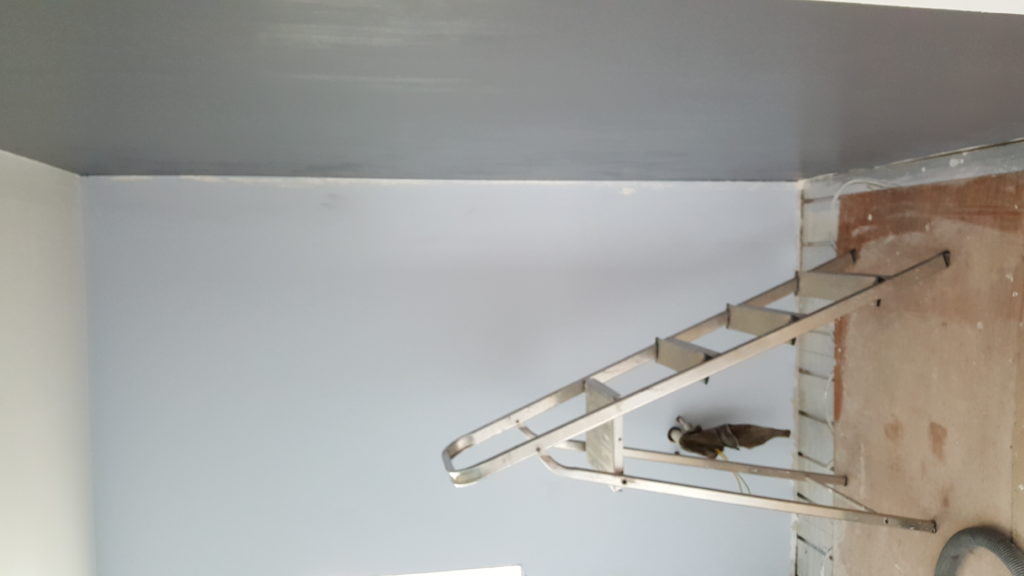 Note to self: do not leave masking tape on for more than 24 hours 🙁  I got away with it with the rest of the walls, but this one is going to need a lot of touching up tomorrow! 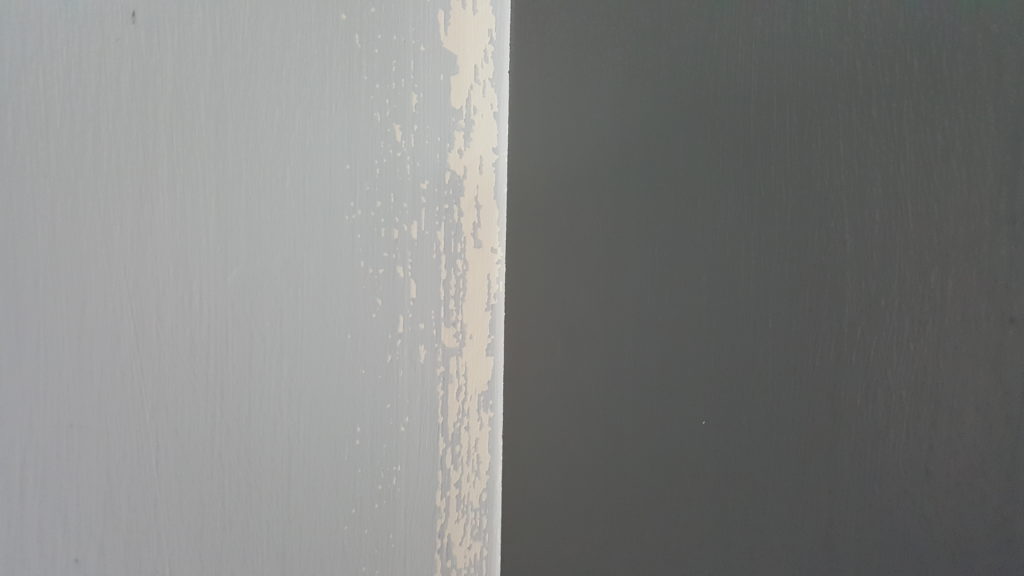