It’s been a day of discoveries in the house.  We’ve spent the last couple of days concentrating on the kitchen, which we knew was going to be hard work, but our efforts are slowly paying off.  Pete the Roofer came over this evening to introduce us to Dave the Joiner, and it was great timing because we were able to ask him about a couple of things we uncovered that looked slightly worrying! 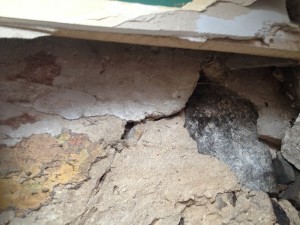 Yes, it’s a very big crack and that whole white bit wobbles, but fortunately it’s old lime plaster and just needs to be knocked off the stone and picked out.

We made a good start on breaking through the plasterboard and oooh, look – is that a lintel I spy emerging? 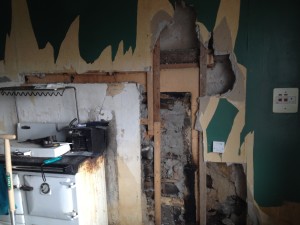 I think that’s definitely a lintel! 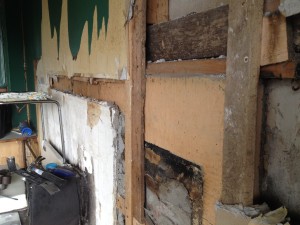 Would you look at the size of that fireplace behind??  It’s blocked up with cement and rubble, but we’re going to get it opened up and see what’s there (subject to the crack in the side of the lintel not being an unresolvable structural issue…).  It’ll make a fantastic feature if we can do it! 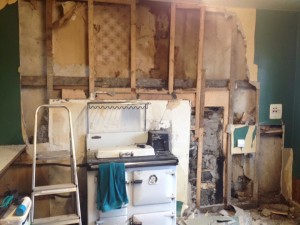 The remains of the pantry innards have been removed. 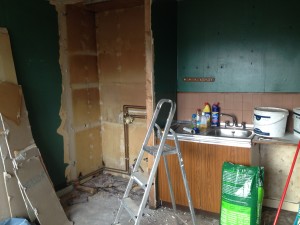 And would you believe that behind the plasterboard we removed, we found at least five layers of wallpaper?? 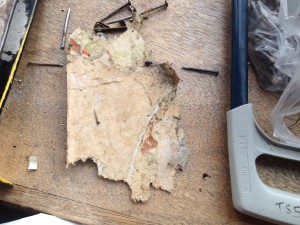 I ended up making a collage photo of all the different ones we found that still had enough left to photograph the pattern – this is just the kitchen, remember. 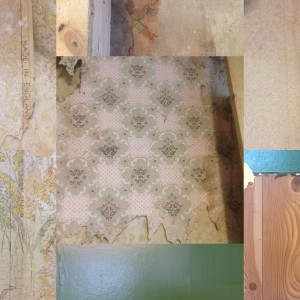 And finally, scratched into the plaster behind the wallpaper, three names – Ethel’s three children 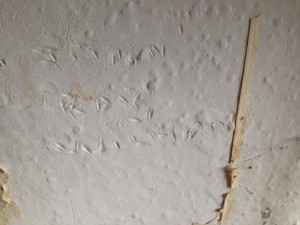 Anyway, the good news is that we’ve found nothing that worries Pete and the even better news is that he thinks he’ll be able to start on the roof in about three weeks’ time.  I’ve spent very little so far, but now the bills are really going to start rolling in.  Pete’s bill will be split into three, the first part paid when materials are delivered to site, the second at the halfway point (to be predetermined and agreed) and the final third once I’m happy with the completed job.  Time to start working out the best way to extract the cash off my 0% balance transfer offers.