Greys are a minefield, aren’t they?  My cousin has the most gorgeous silver-grey living room and it was her house I had in mind when I chose grey for the living room here.  Not the wonderfully-named Farrow & Ball Elephant’s Breath, but a Crown colour called Granite Dust, which I was hoping would come out a soft dove grey.

It looked alright in the can, but the more I put on, the more it looked like I’d flayed an elephant and thrown the skin at the wall.  I decided to stop, let it dry and see how it looked in the morning.  Thankfully it lightened, but you can see from this shot of dry on the left and freshly painted on the right why I was a bit concerned! 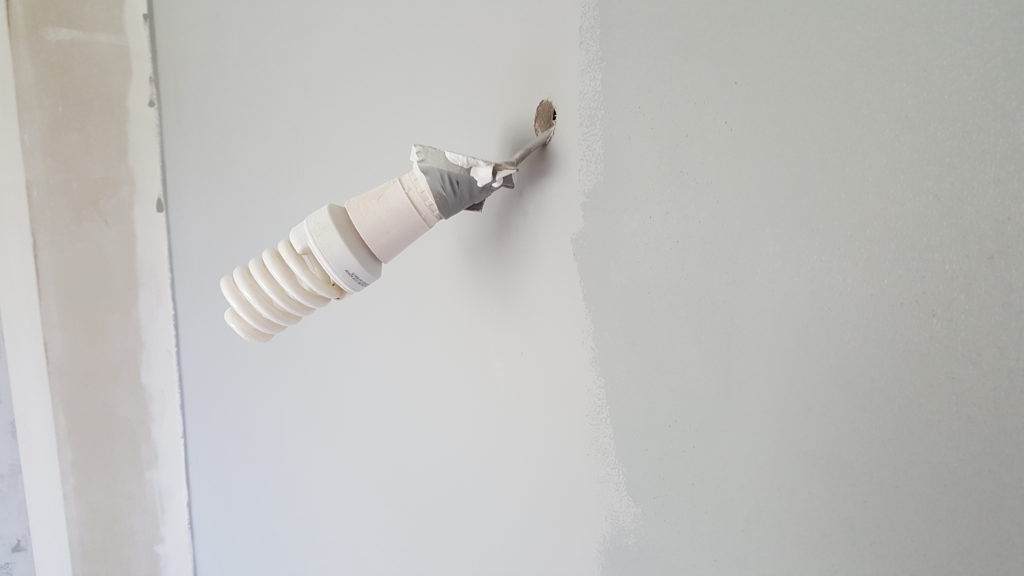 Amazingly it only needed one coat, and even more amazingly I just about managed to do the whole room with one can (though I did end up scraping round the can with the brush to finish under the window seat and then going over it with the roller to give it the same texture!).  MIck’s improvised pasting table in the middle of the room! 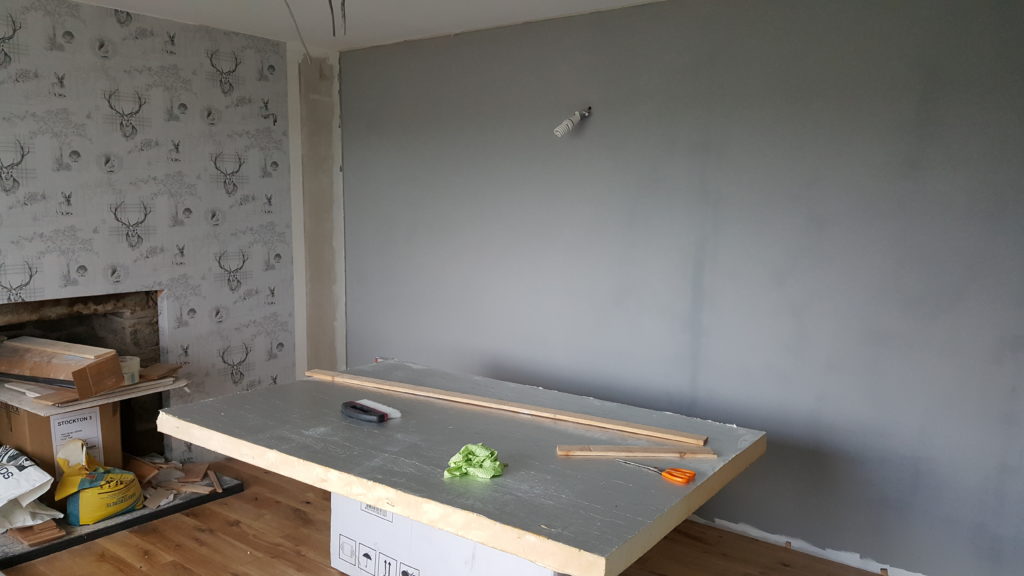 There are a lot of cliches in the Highland tourist industry.  One of them is tartan carpets, which is not a route I’m going down, but I couldn’t resist a little bit of Highland kitsch with a few stags and a bit of tartan on my feature wall!  Mick is the wallpapering guru in this household, it’s a skill I have yet to even learn the basis of, let alone master (the one time I tried was a total disaster!). 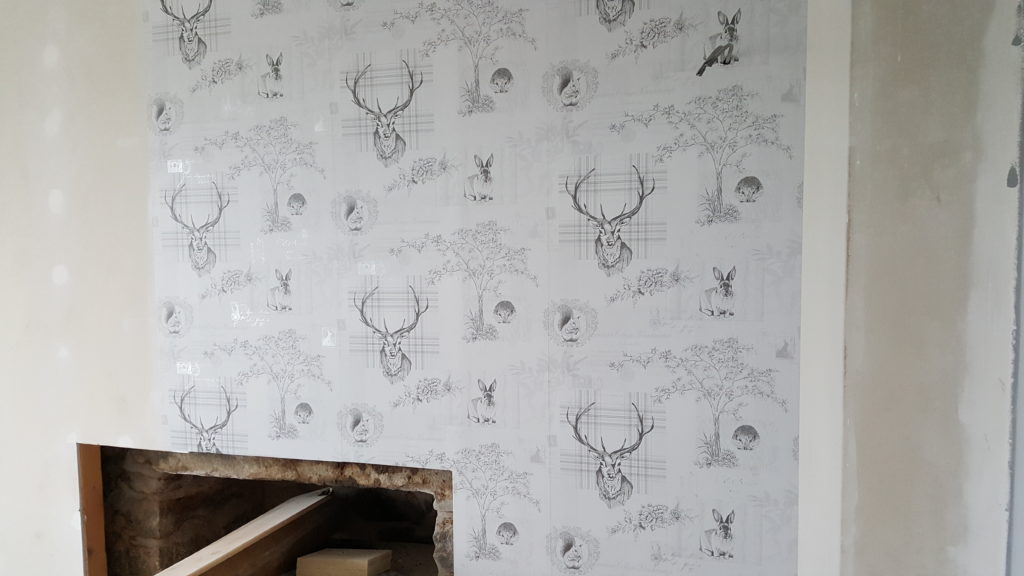 I also got the double bedroom finished, with the teal paint, and I’m pretty happy with it.  The second photo is probably the more accurate representation of the colour.  I still need to put a top coat of Milk White on the inside of the dormer, but wanted to get cracking with the living room in case David turned up this week (we’ve since had confirmation he’ll definitely be here from Wednesday next week).  As we’re due some days of heavy rain over the next week, Pete is trying to get back to me on one of them to pick and point that fireplace. 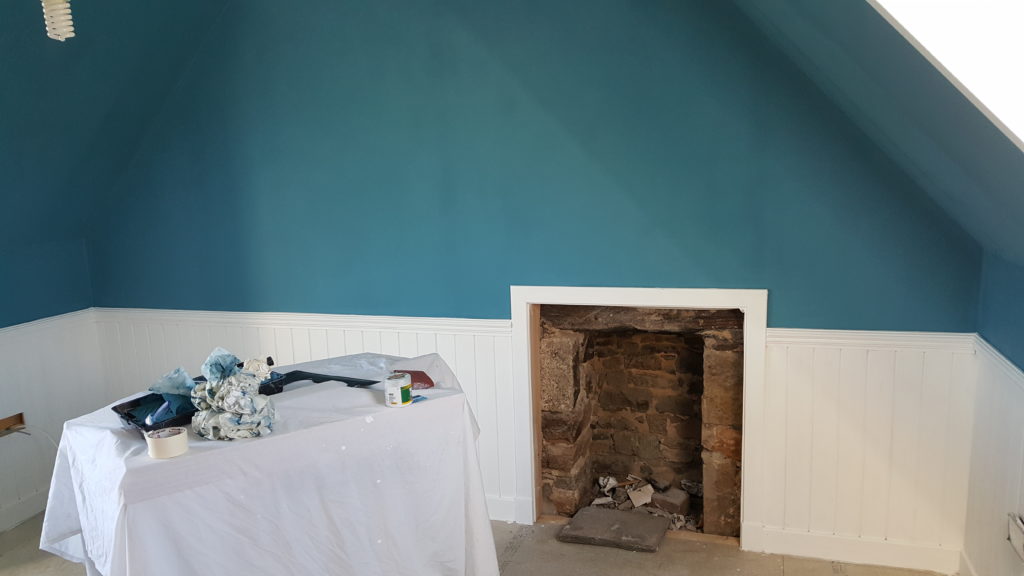 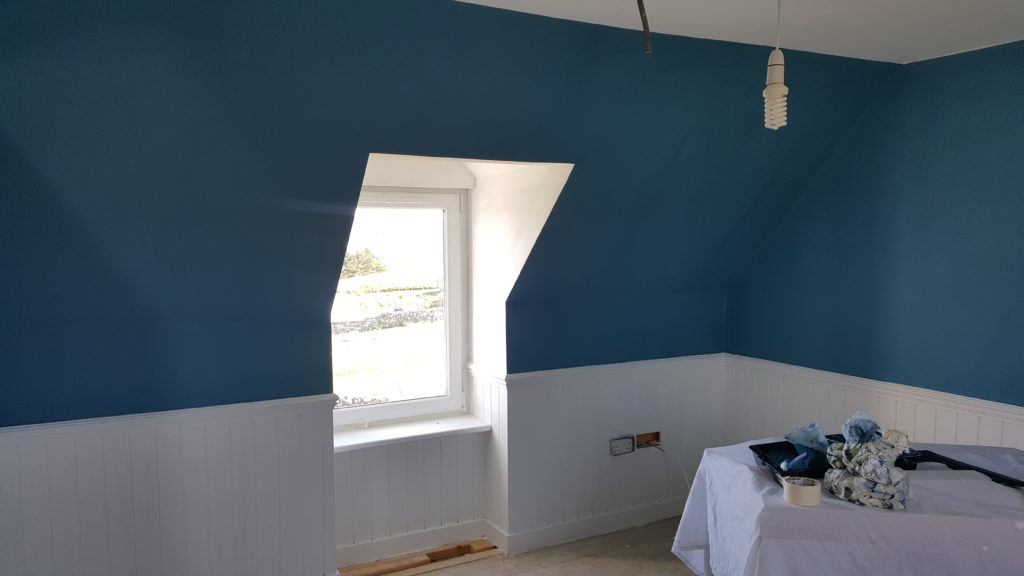 So that’s five rooms out of eight painted – just the twin room, hall and landing left to go!