Anyone else swallow frogs?  The saying stems from the thought that one should swallow a live frog first thing every morning on the grounds that nothing worse is likely to happen to you that day (or the frog, for that matter…).  Getting the maps done for the decrofting application has been a frog that’s been growing in size steadily over the past month or two, so last night I held my nose and swallowed it. 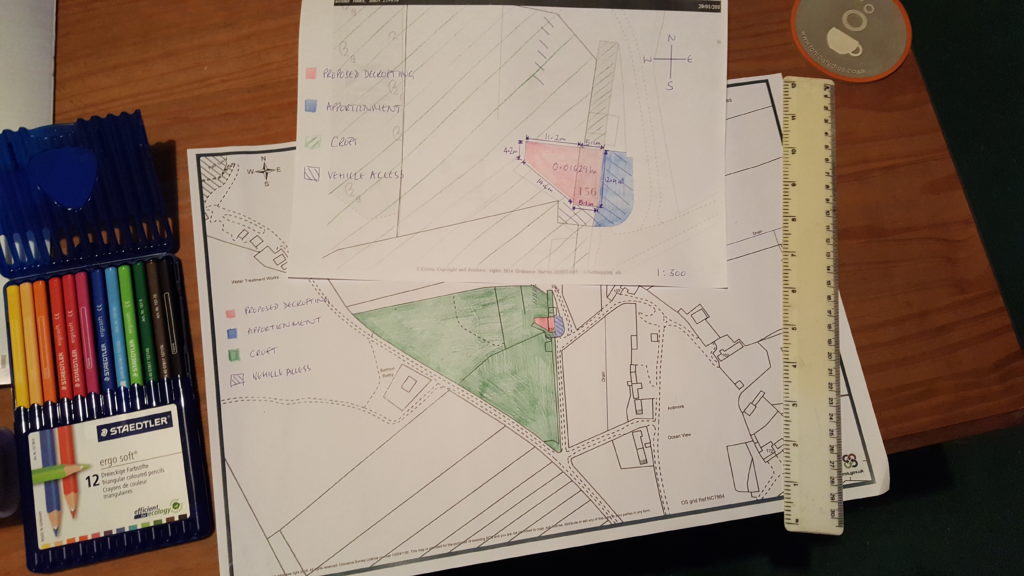 I need to ring the Department today (or the Scottish Government Rural Payments and Inspectorate Directorate, to give it its proper name, but SGRPID is tricky to pronounce, so everyone calls it the Department), as they are the representatives of my landlord (the Scottish Ministers) and see if I need an appointment to get a signature on the forms to say they approve of the application or whether I can just drop in.

What else has been happening?  Mick has been working hard on his improvised plasterboard-cutting table 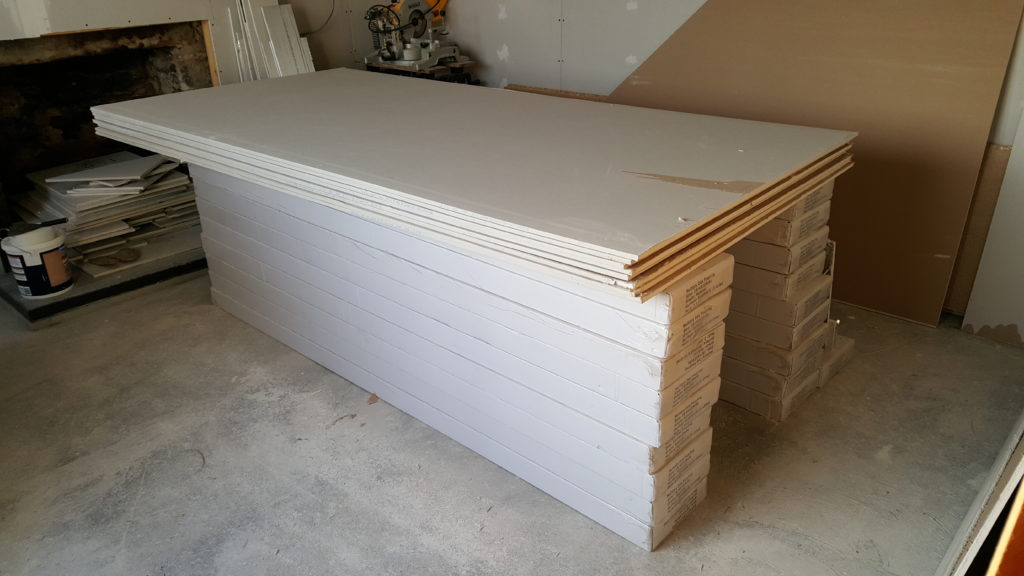 and as a result we have three separate rooms again upstairs, plus Derek and his team have finished laying the underfloor up there. 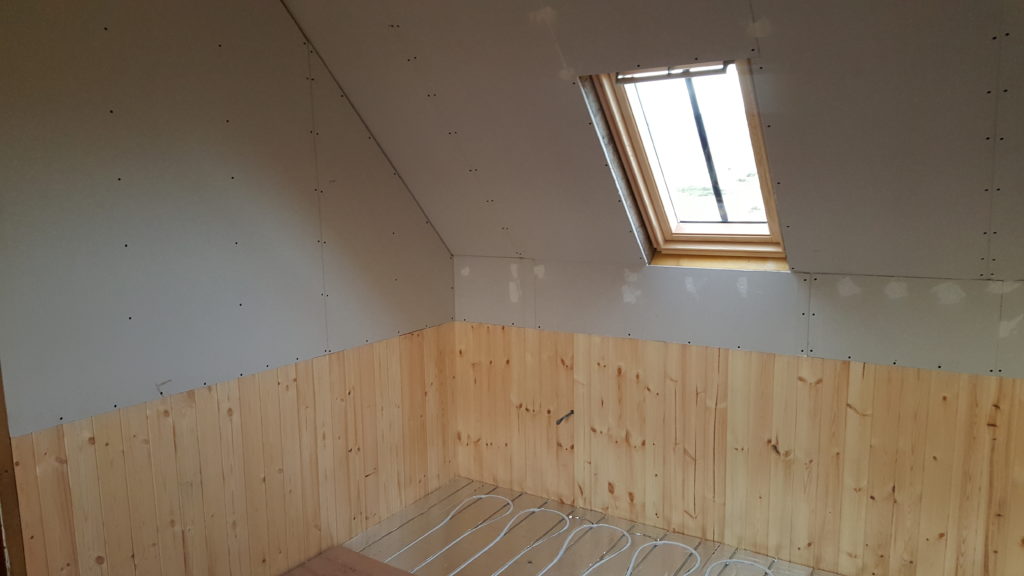 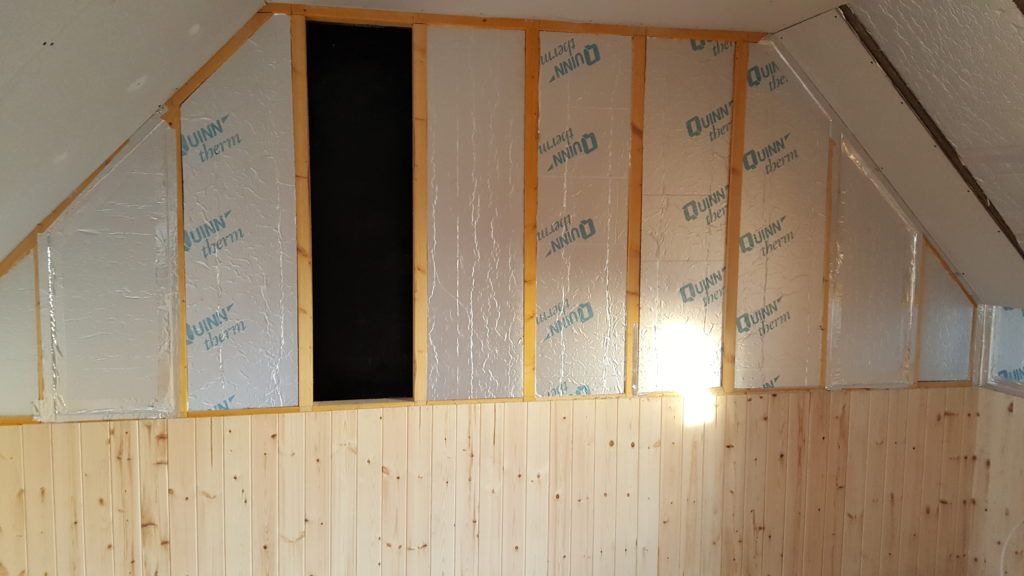 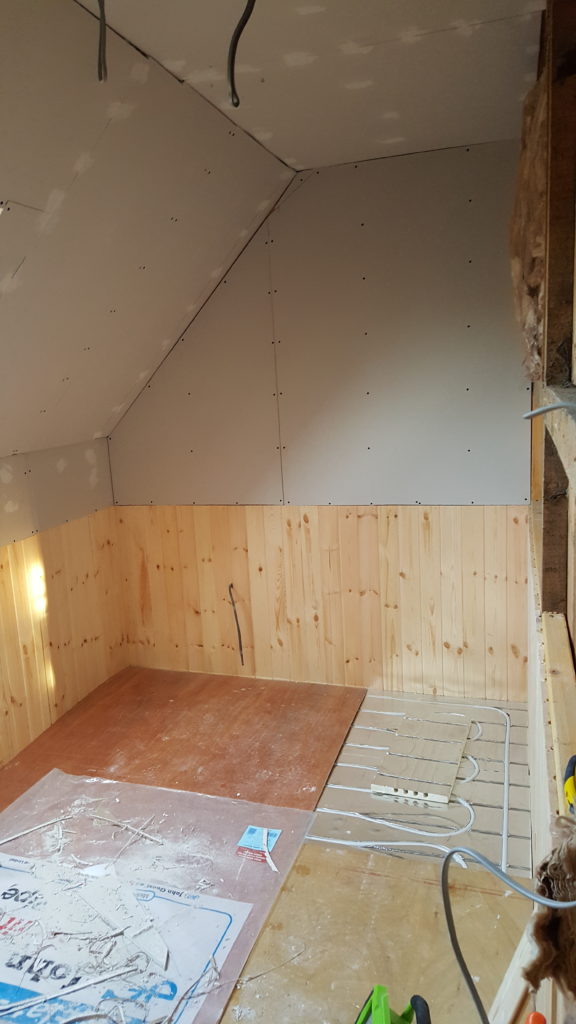 Last of the insulation going in upstairs 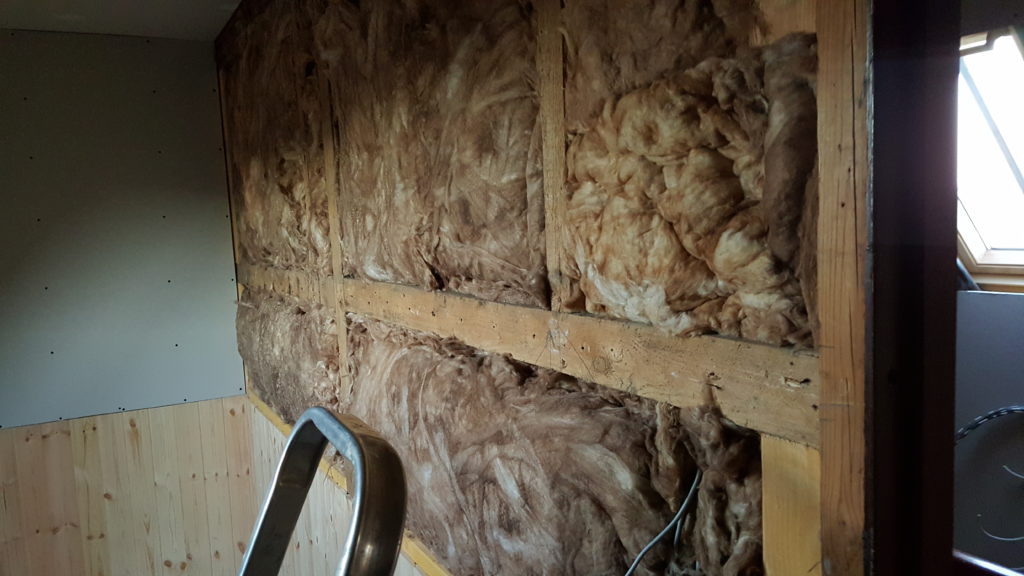 Bathroom ready for the pipework for the shower. 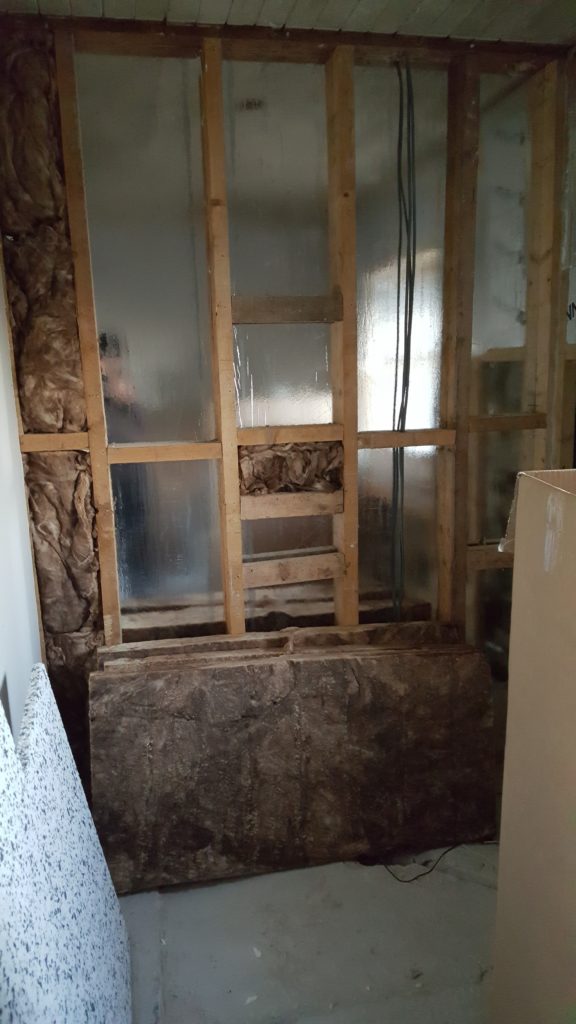 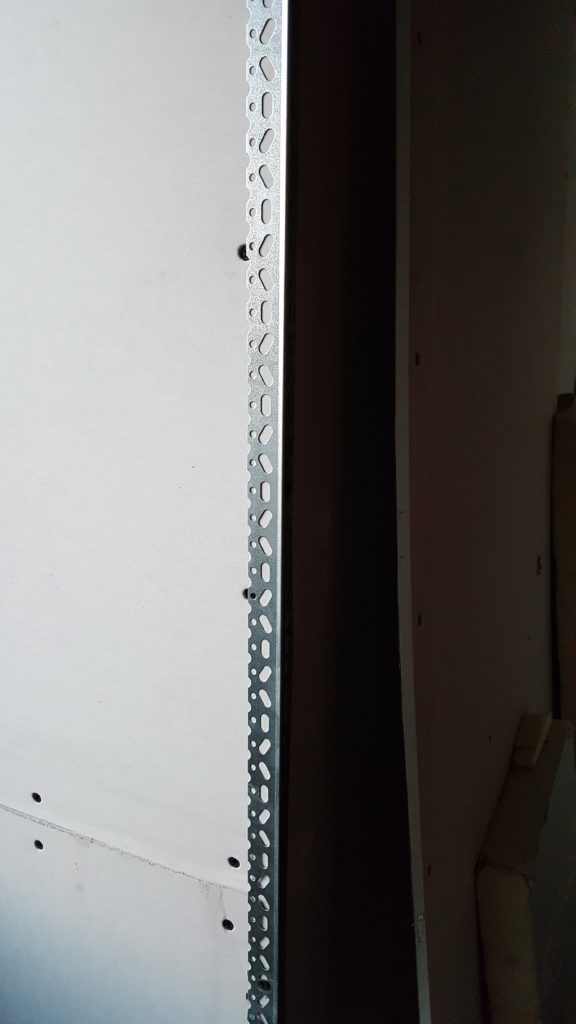 We had a Rembrand delivery on Thursday.  Mick had ordered some more plasterboard and the 22mm chipboard sheets to go over the underfloor heating upstairs and had arranged with them to ring my office phone when they were close so I could go down and help unload.  Now, every time they’ve been here in the past, it’s been around 10.30-11am, so when I got down the road at 9.15 to feed the sheep I was a bit surprised to find the order neatly stacked outside the front door.  The problem was that moisture-resistant plasterboard sheets weigh 26kg (or about 57lbs) which is over a third of my bodyweight and we had a fairly stiff breeze of about 35mph coming directly from the south, which meant that the 8×4 plasterboard sheets and 8×2 chipboard sheets (which themselves were about 15kg each) turned into giant sails, blowing me around with them when I picked them up.  After a bit of a false start when I tried to take a plasterboard sheet straight into the living room, got it wedged between the stairs and the front door and had to climb out of the living room window, I got the 8 plasterboard sheets and 30 chipboard sheets inside and stacked up in about 45 minutes.  Seems a winter of heaving 25kg sacks of sheep feed about has its uses!  David’s away at a wedding at the moment, so once he’s back he’ll come and lay this for us, then it’ll be ready for underlay and carpet. 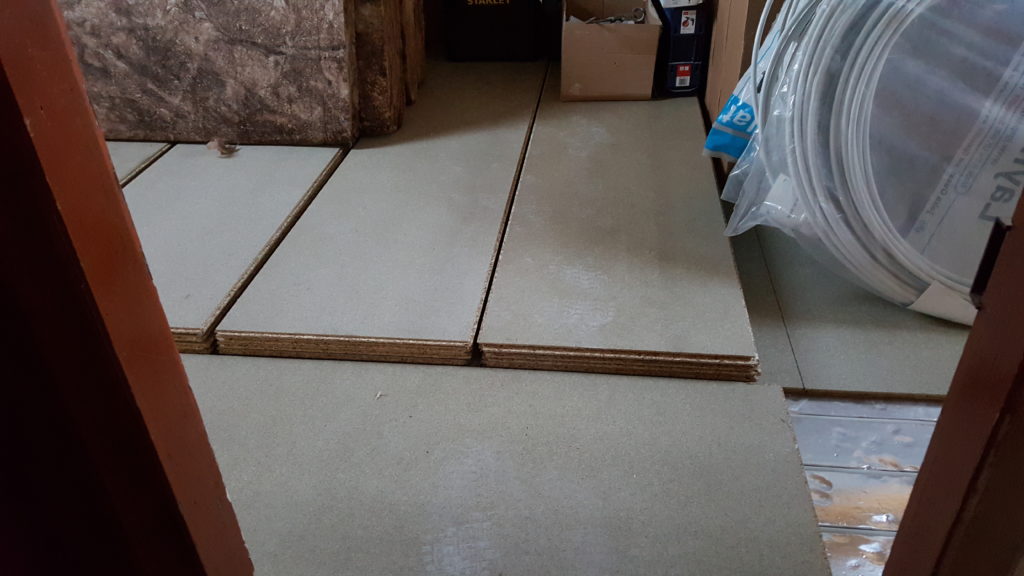 I also had a surprise gift – John, Ethel’s former partner, turned up with this and has refused to take any money for it, because he reckons he put the barn roof on in 1991 and it should have been good for a few years more yet. 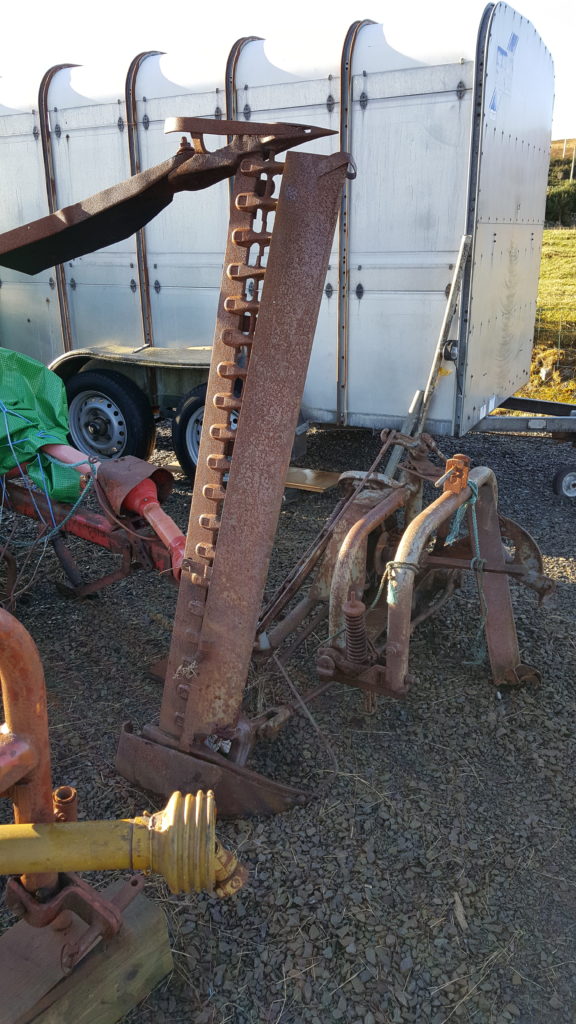 For those of you going, ‘What on earth…???’ it’s a Massey Ferguson fingerbar mower (the second blade is in the shed for sharpening) and it means I now have all the equipment I need to make my hay without outside assistance this summer, though I suspect I shall be on the phone to John going, ‘Help!’ the moment something breaks down!