The week started with David finishing off the kitchen floor. 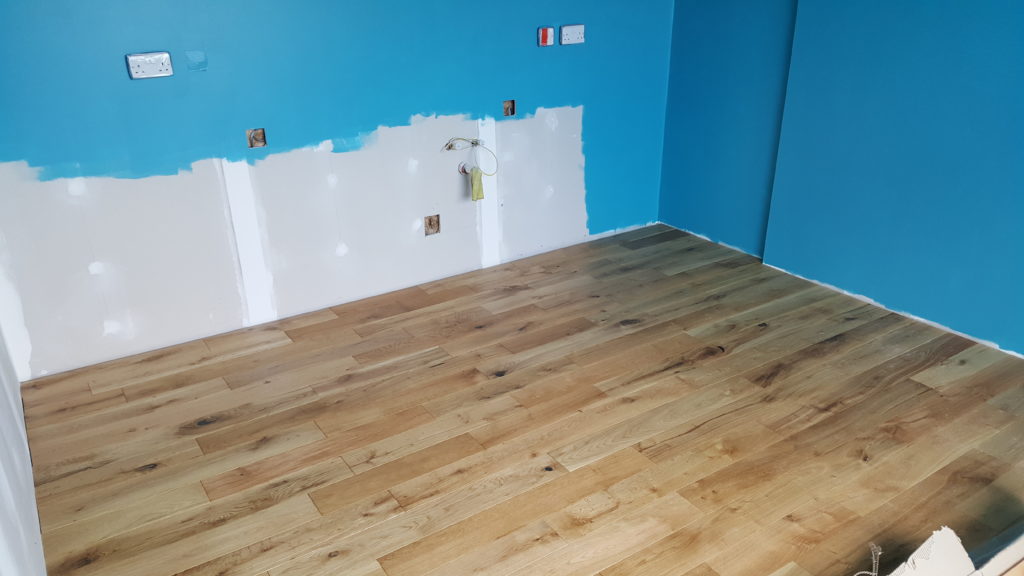 and then moving through into the hall.  It was a slower job than I’d anticipated, mainly because of the amount of work it took to carefully cut all the edge pieces to fit around the door and the stairs and into the understair cupboard. 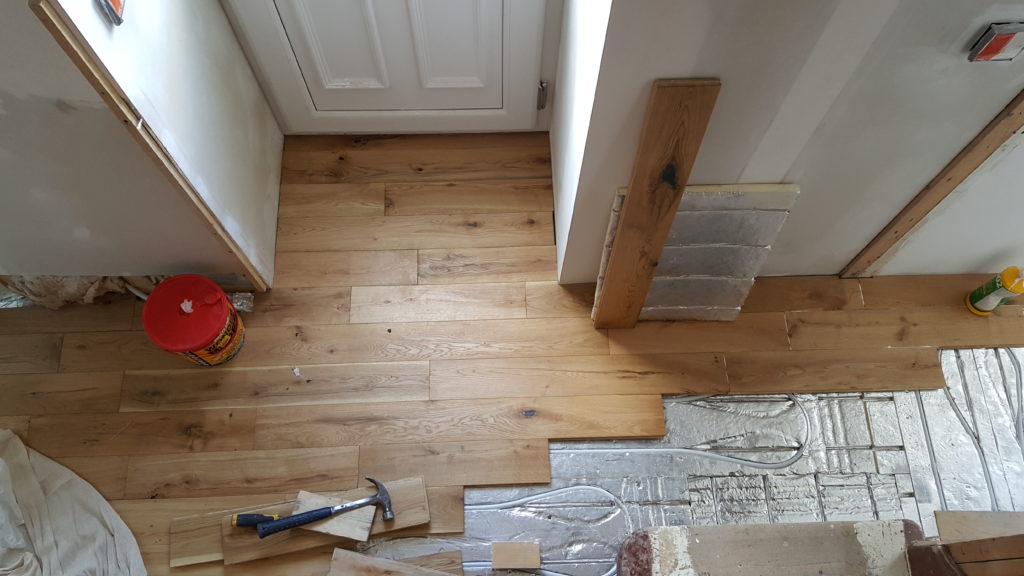 On Tuesday, Dougie turned up and he and David loaded the kitchen into the back of David’s van and brought it down the road.  Units started to go in. 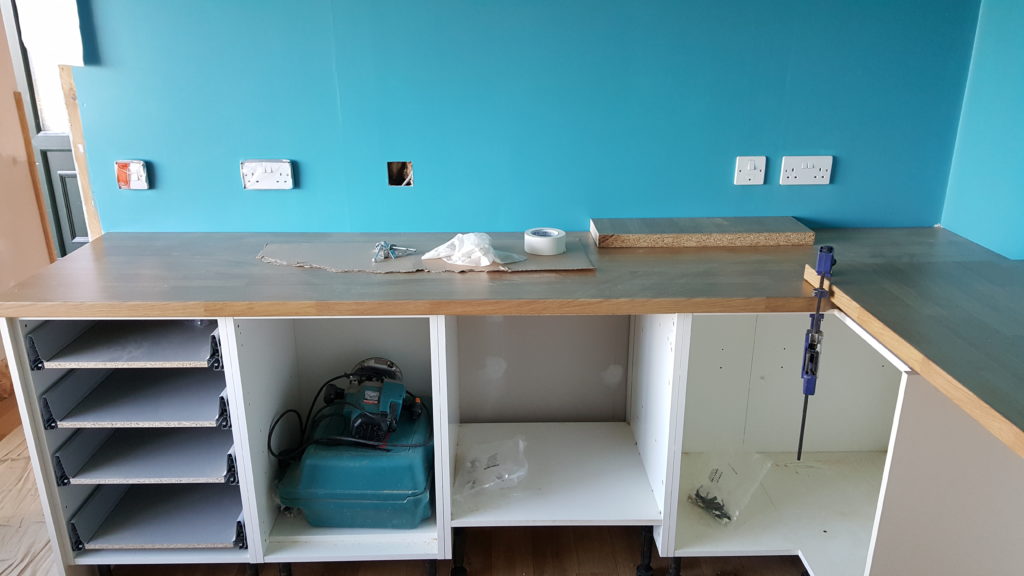 and Dougie got the bathroom lights fitted as well.  They’re 18-watt LED lights and are VERY bright! 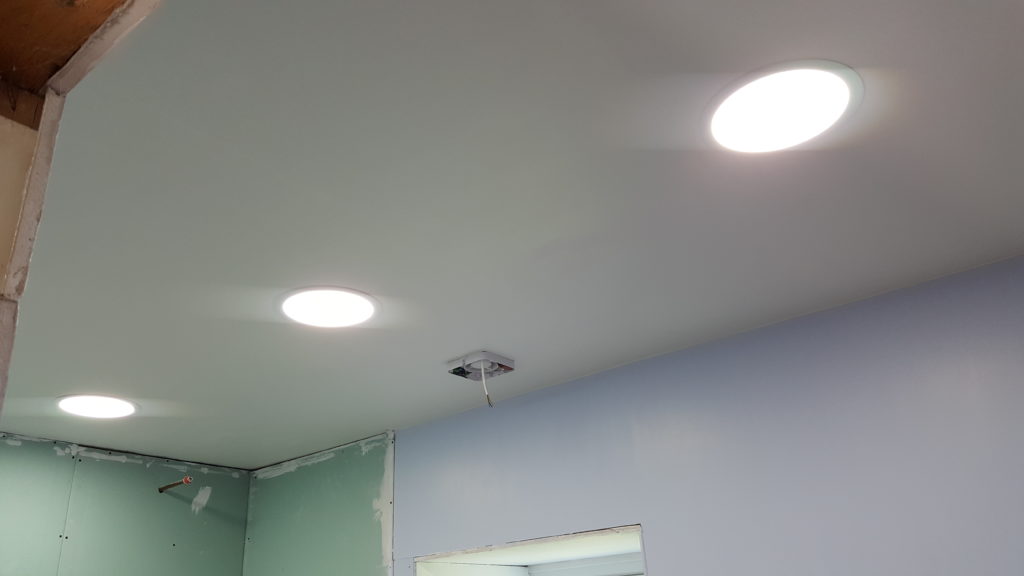 On Wednesday I added to the growing paint mountain when I realised that (a) I hadn’t bought the colour for the twin bedroom and (b) I’d only got slightly off-white paint for the ceilings, not the woodwork.

On Thursday David got the living room floor down 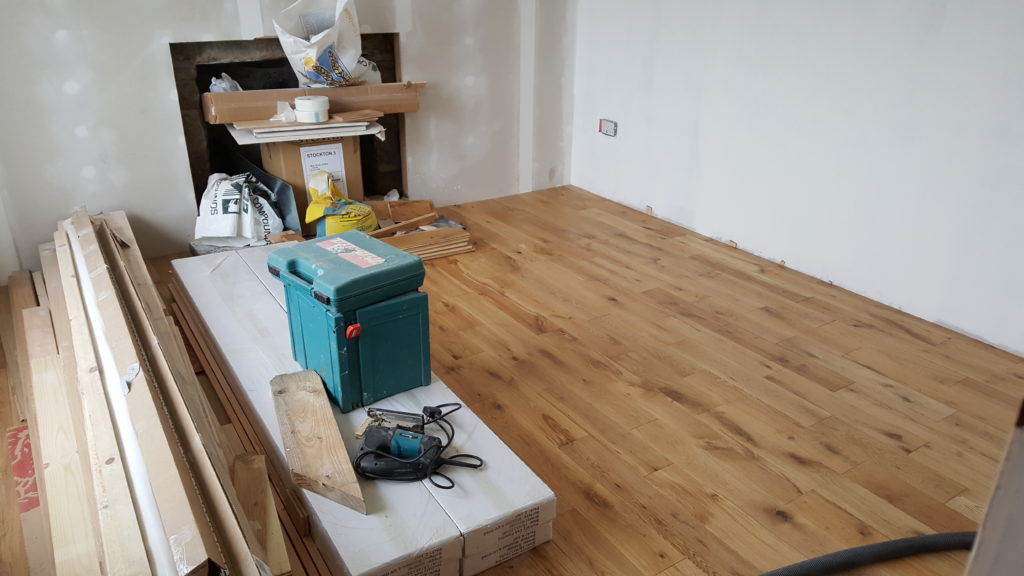 and got the wall units over the sink up.  We ended up having them about 70mm higher that we’d originally intended, because David thought to check the height of the tap versus the base of the cabinets and realised that you were going to skin your knuckles moving it if we had them as originally planned. 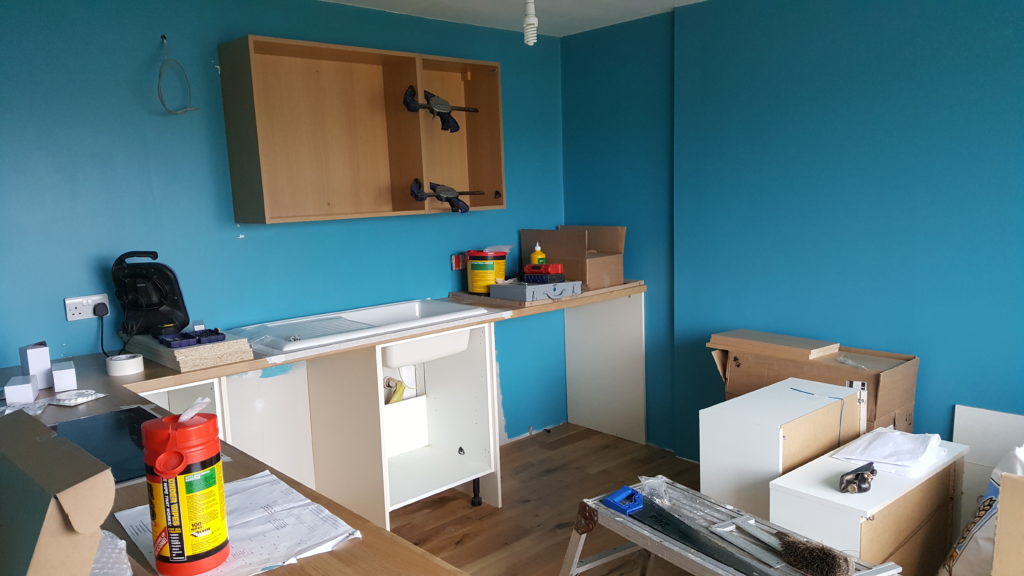 On Thursday night I cleared out and Henry’d the bathroom, all ready for David to lay the floor in there on Friday. 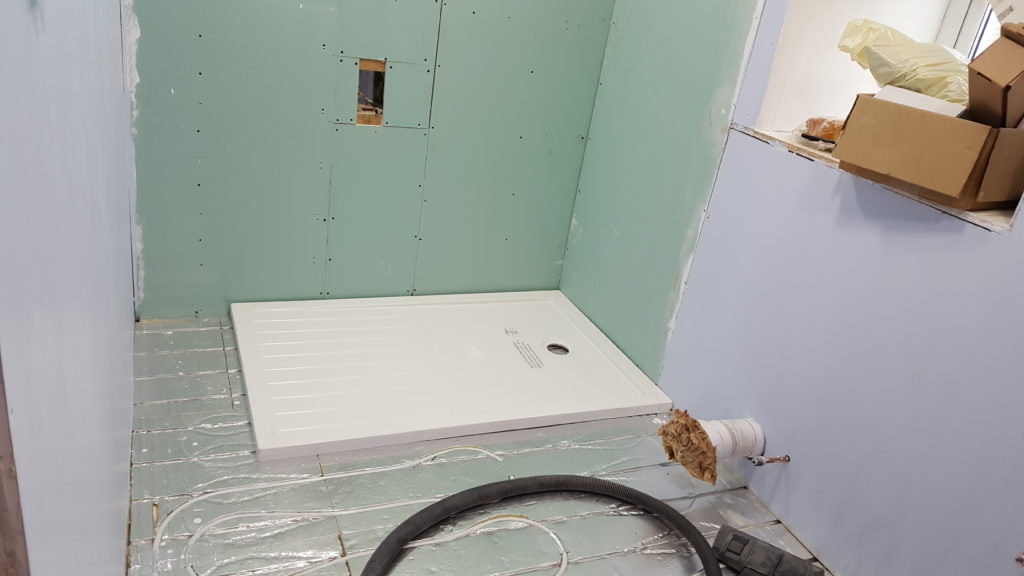 On Friday we hit a snag.  I was mucking out the horses’ field when I realised that David was standing in the garden.  He’d discovered that the wall between the kitchen and the bathroom, which was one of the few we hadn’t done from scratch with the studwork, didn’t have studwork in the right place to hang the wall cabinets from.  My options were (a) he broke open the plasterboard, put some wood in, replasterboarded and then I skimmed, sanded and painted again, or (b) he could go into town and get a hanging rail from Howdens, which is a metal strip that could be screwed into the existing studwork to hang the cabinet on.  We ended up with option (c) – I drove into town to pick everything up and he got on with flooring the bathroom!

I was also under instructions to pick up an upstand for the kitchen worktop.  Because the kitchen/bathroom wall isn’t quite straight, there was a gap of a few mm between the worktop and the wall towards the corner, and David felt that adding an upstand would be a better option than filling it with grout.  So I trundled into town in our ancient pick-up truck, which has a 3-metre lock box on the top of it.  The hanging rail came in 2.4m strips, the upstand was 3m lengths – and was about an inch too long to fit inside!  The Howdens manager had a brainwave and ran back inside for a roll of pallet wrap.  A bit of clingfilming later and I was good to go. 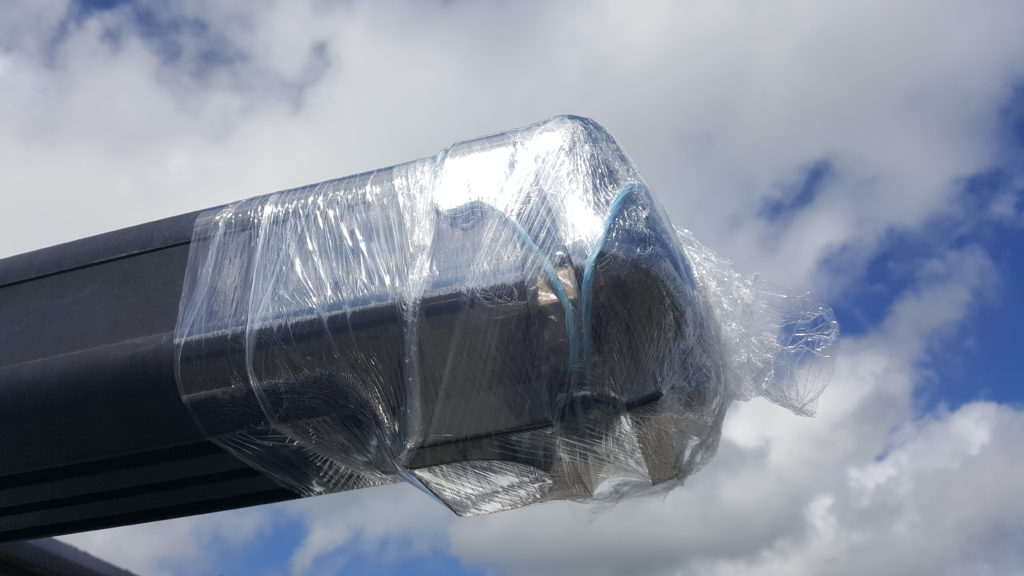 So where did we get to by the time David packed up his van on Friday afternoon?  Well, we had a complete downstairs floor, because he finished the bathroom. 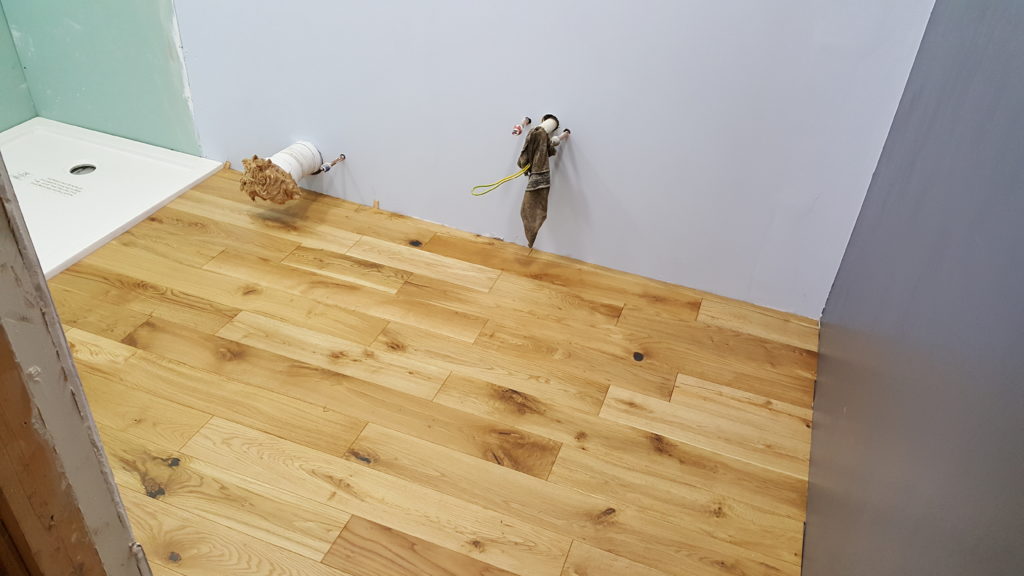 And the kitchen?  Well, we didn’t quite get there, but it was pretty close. 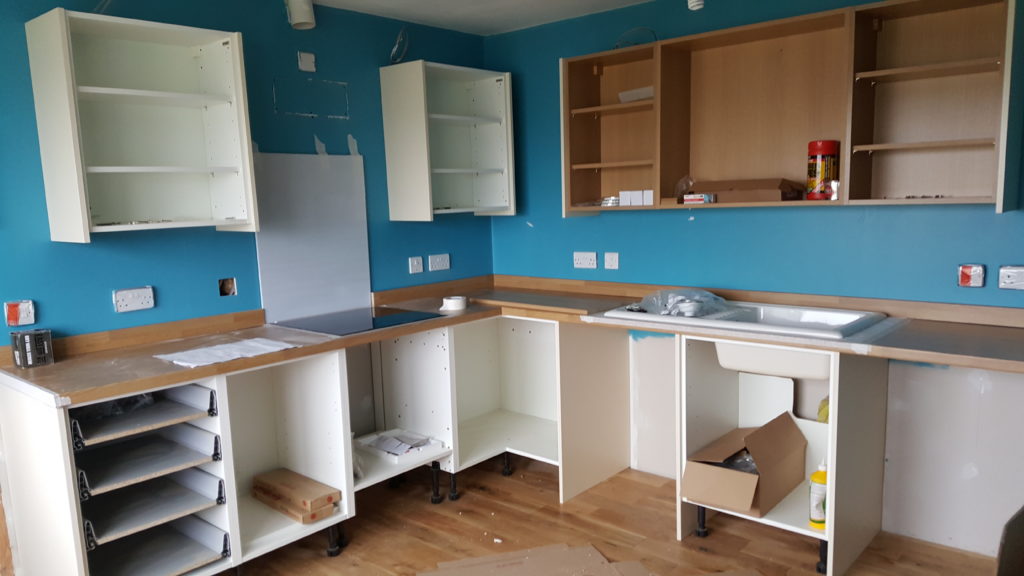 Dougie needs to come and wire in the oven, hob and extractor fan (if you can make out the white-edged rectangle on the left-hand wall, between the cabinets, that’s where David did have to break open the plasterboard to install some studwork for Dougie to attach the extractor to!), Mick needs to plumb in the sink, dishwasher and washing machine, and then we need to make up the two big drawers which will go in next to the four-drawer unit, put the shelf in the corner unit, put the innards in the plate rack unit above the sink and fit the doors and kickboards.  Oh, and that upstand needs attaching to the worktop.

Also still left for David to do – downstairs skirting boards and door frames, fit doors (which we haven’t bought yet), make a cover to hide the pipework in the hall, do the window sills in the living room and kitchen and fit a thin piece of wood around the bottom of the landing bannister spindles to hide the underfloor heating.  He’s going to come to us any days he’s not needed on the new build, but work is going to slow down again now.

I haven’t exactly been sitting on my backside all week, I’ve been painting.  The double and single bedrooms both have their undercoats and the ceiling in the single room has had its first top coat.  I’ve found that I’ve been getting really sore forearms using the roller, so have switched back to a brush.

Sunday I skived off the painting and instead we wrestled the sheep through a footbath (twice) and then I went up to the hill to put my peats up.  Last time we were up there, we were laying them out flat to dry in the sun.  They’ve shrunk somewhat as a result (these were pretty much edge-to-edge). 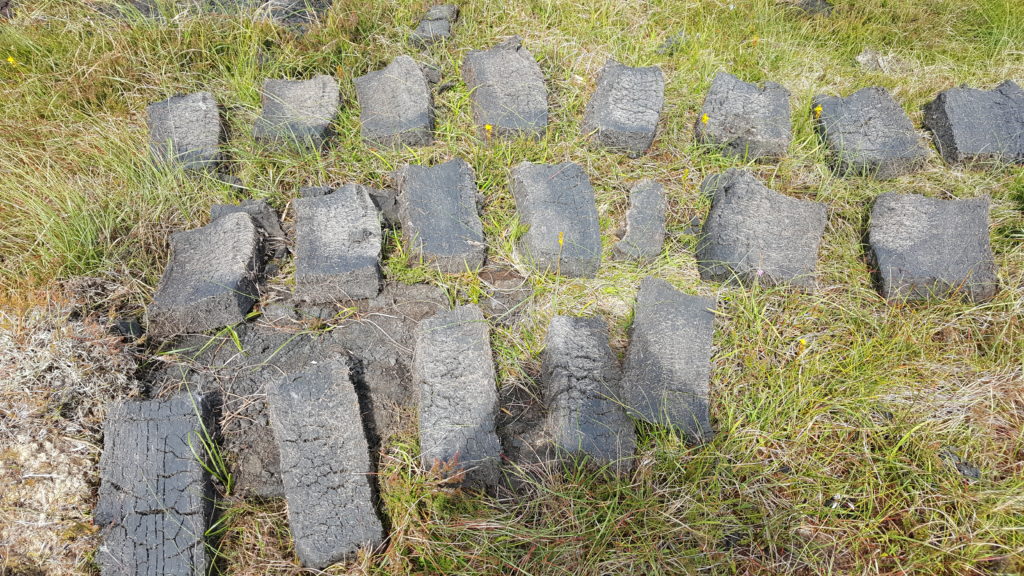 The idea is to get as little of the peat in contact with the ground as possible.  Some people make mini-Stonehenges out of them, some stand them up on their ends perpendicular to each other for support and some put them up in a herringbone pattern by getting a small chunk of peat to prop up the first one and then laying peats at 90-degree angles to each other.  I went for the herringbone. 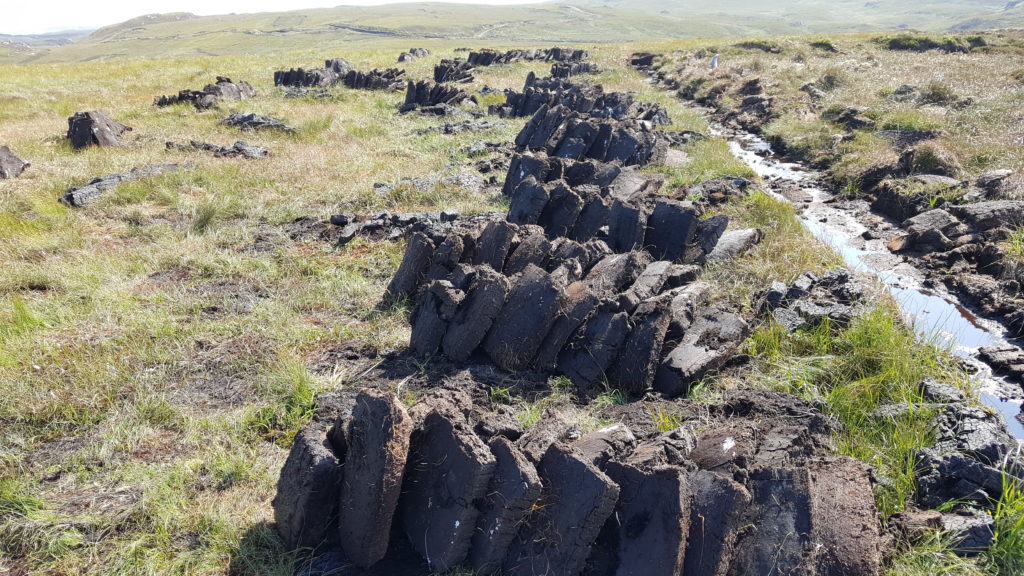 I got the long side of the bank done and then my back told me that if I wanted to be able to move today I’d better leave the short side for another day, so I’ll try and get back up there tomorrow and finish them off.