Mick was away this week, so I took the opportunity to ramp up my workload and earn some extra cash, which meant that nothing got done in the house until the weekend.

Derek the heating engineer came round on Saturday morning to (a) remove the existing central heating system (we needed the radiators off the walls to take the last bits of panelling off) and (b) deliver his estimate for installing underfloor heating and fit the woodburner.  He warned me that I’d probably need to sit down before I opened the envelope, but I knew from Googling that I was going to be looking at £75-£100 per square metre, depending on which method of fitting was used.  So to:
1.  Disconnect existing radiator central heating system
2.  Supply, install and commission 65sqm of overfit insulation boards, 4 rolls of edge insulation, 200m of 15mm layflat pipe, 6-zone manifold, 6 actuators, pump control pack and an under-floor control system.
3.  Install multi-fuel stove.
for £5,685+VAT (total £6,822) was more or less bang on.  It’s actually going to be a little bit more, because thanks to a miscommunication he thought that we were keeping the existing wetroom floor in the bathroom and so didn’t include it in his measurements, but it won’t add too much more to the cost as it’s not a huge room. 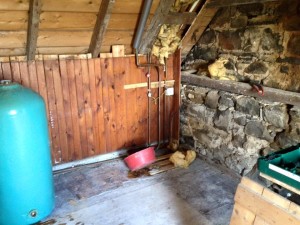 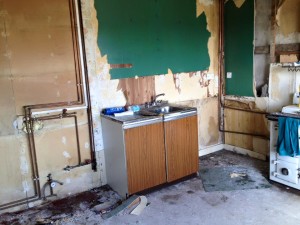 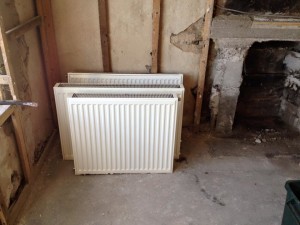 My job today – stripping out bedroom three.  That still had two and a half completely untouched walls when I started! 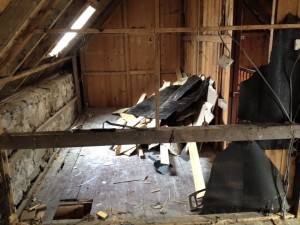 Plank addressed to the house 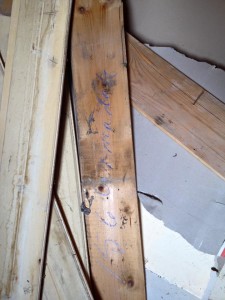 A very old nail left on the studwork behind the plasterboard and a card found down the back of the skirting board. 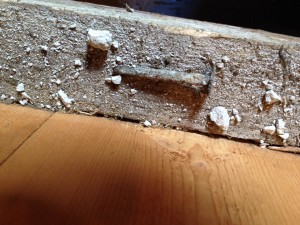 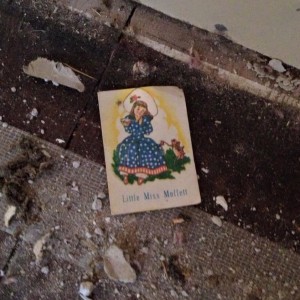 Upstairs really starting to open up now – just the two bits of panelling in bedroom one to take out.  We’ve decided that (a) for safety and (b) because we don’t fancy trying to plasterboard that high over the stairs, the panelling up the stairs can stay in place unless any of the trades needs it taking out. 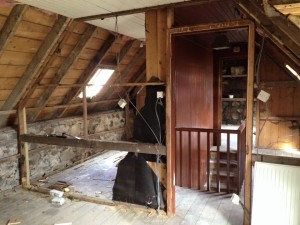 Lovely old hearthstone set into the floor – it’s a shame this will have to be covered up. 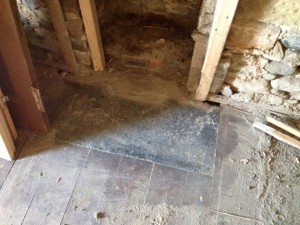 This was my reward for carrying a huge pile of removed panelling from the second bedroom out into the byres on Saturday – I’ve been itching to see what was under this bit of lino and now the radiator’s gone, I could finally find out. 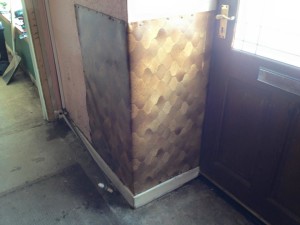 Sadly, a bit of a let-down! 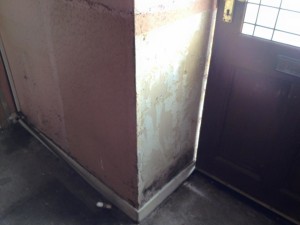 And finally – us!  Mick tackles the pipework, Jura supervises from her favourite spot on the windowsill and I take a boilersuit selfie 🙂 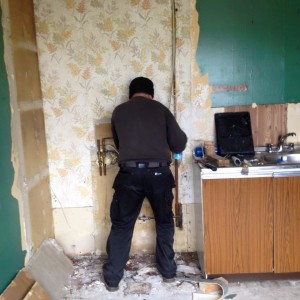 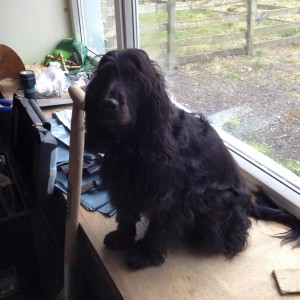 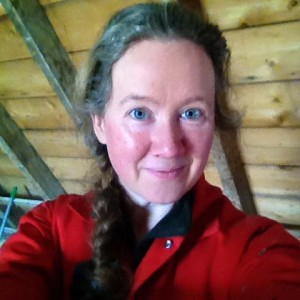