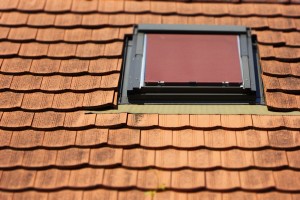 I have my friendly local roofer doing some work on my house at the moment and since rain had temporarily stopped play, I dragged him up the road to have a look at the roof on Ethel’s House.

The roof is currently Marley Eternit cement fibre slates and it’s not too bad.  There’s one tile missing on the back and a few that have been glued back into place, but it’s basically sound and should survive the winter.  However, what I want to do is enlarge the two tiny Velux windows – if you can see the size of the one on the front, there’s another the same size on the back and that’s the only light for the third bedroom which, consequently, is rather like a prison cell.

As I was standing out the back and the roofer was admiring the views over the fields and moor to the hill, it slowly dawned on me that I could put three Velux on the back, one in each bedroom, which would really bring some light into the upstairs, open up the views behind the house and, with the right positioning of the beds, would mean guests could lie in bed at night and look up at the stars or the Northern Lights (the house is about a third of a mile from the nearest street light).

Roofer thought this was a fab idea, but pointed out that he’d be taking off so much of the roof to do it that it would virtually be only the cost of the slate and a couple of days’ labour added on to the job to get the whole thing re-roofed at the same time.  So, subject to the purchase all going through, we’re booked in to have it done next March.