I was working away for a couple of days this week, so it was nice to come home and see progress.  The roof is now very nearly finished – the ridge tiles are on, the guttering has all been hung and the downpipes attached.  There was only a drain for one downpipe on the back, but Pete has advised a roof of this size needs two, so he’s fitted one and when we get Kev in to do the groundworks, we need to ask him to dig us a channel so we can put one in.  They’ve re-harled the track where the old power cable used to run and all that’s left to do is the chimneys, so they’re currently moving the scaffolding around to the gable ends. 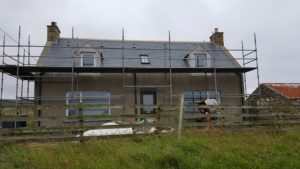 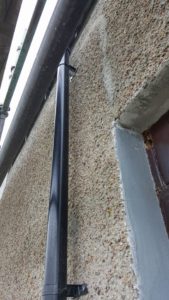 I got a call from SSE PD (Power Distribution) while I was away to say that they’d had a cancellation out my way and could fit my job in, if that was acceptable.  More than!  Fortunately Dougie was available to let them in and work alongside them.  The cable in has been completely replaced and we now have about a metre more clearance under it. 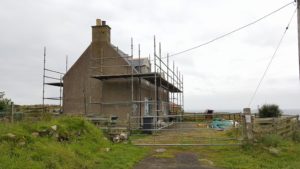 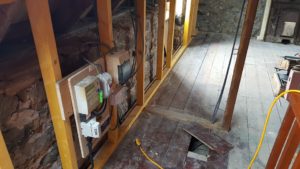 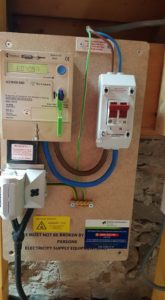 David managed to get here for half a day as well and the framing is coming along nicely.  I now know what a dwang is!  (The horizontal brace piece between the vertical studs.) 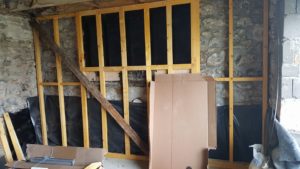 Dougie nearly gave Mick a heart attack by saying he was sure that 100mm Quinn Therm needed a 50mm air gap rather than a 25mm – we’ve only just got 25mm for where it’s going in the rafters.  So Mick did a bit of Googling, and yes, it does need a 50mm air gap if you’re using tar paper as your roof underlay, but if you have a breathable membrane like ours, 25mm is fine.  Phew.  I think Rembrand would probably have exchanged it for us, but it would have been a hassle!

We’ve also done a nice bit of materials recycling by asking James and Connor to dump the old roof into the big tractor ruts, which were getting on for a foot deep in places. 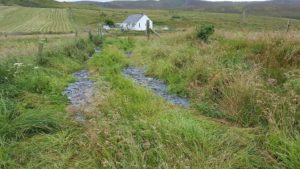 So what next?  Well, Dougie’s away on holiday, which will hopefully give David a chance to get ahead a bit.  We’re going to start fitting the insulation into the roof today to make some space in the living room.  ERG rang me to say that my windows and doors could be installed on 25th and 26th August, so I’d like to have David around on at least the first day if possible.  Pete’s going to give me the number of a guy called Magnus who has an air-free paint spraying system and who can paint the house for me – whether I can get that done before the windows go in is debatable, but we’ll try!  Kev is hopefully coming over this afternoon to talk groundworks for both here and home – in other words, it’s all getting expensive!  Fortunately the last Barclaycard balance transfer offer has reappeared, so I cleared the card last week and will apply for the transfer on Monday, which gives me another £11,400.  That should finish paying for Pete and Dougie and the windows and Magnus with hopefully a bit left over towards Derek the heating engineer, who I should probably ring to find out what his availability is going to be over the next few weeks!