As anticipated, the heating system was successfully switched on on Thursday afternoon, but there was just one small problem left to solve – Derek had checked the tank and found that what I thought was 4-5″ of oil was actually 2-3″ of oil and about 2″ of water.  The system had been off for so long that condensation had been slowly topping the tank up.  So Mick went down the road armed with a can of WD40 and a determined expression and managed to get the lock off the main filling cap and then Steve came back on Friday morning, syphoned off three very large cannisters of water, bled the system again and said I was good to go, but please to get oil delivered ASAP!  One quick phone call to Simpsons later and I have a delivery scheduled for early next week.

Dougie had left all the thermostats set to 21C and as a result the house had warmed up amazingly over 24 hours and was showing 18C or 19C in all rooms.  We’ve turned them down to 16C to eke out the remaining oil a bit and also because it’s just going to be too hot for us to work in there as it is at the moment.  It’s fascinating to watch the the little motors open or close the valves as the temperature setting changes. 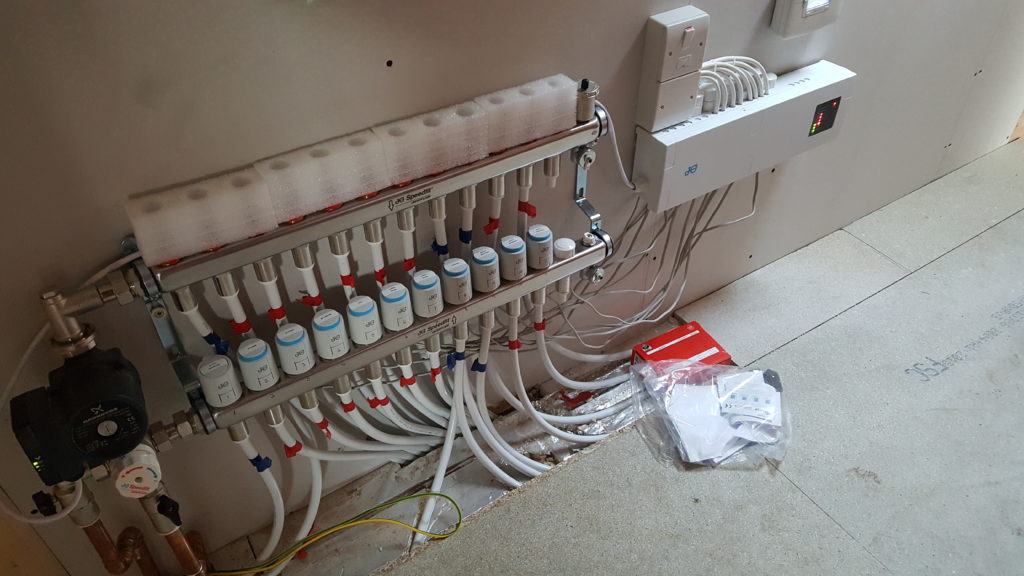 I sent David a text to see if he could come and lay floors for us during the first week of April.  He’s going to schedule us in a couple of days, but is a bit distracted building a timber-framed house for someone at the moment, so I suspect we’re going to have to use our time with him carefully as he’s expecting it to take at least 12 weeks full-time.

Mick and I have both taken next week off work and we’re planning to blitz the house in terms of taping, jointing, skimming, sanding and, hopefully, painting, so that by the time David arrives to put the engineered oak floor down, we’ve got as much of the downstairs messy stuff done as possible.  Wish us luck!