I got a call from Dougie the electrician yesterday.  “Sorry I haven’t been up this week,” he said.  “I’ve managed to catch ringworm and I’m trying not to go near people as I’m very contagious.”  He’ll be back with us next week, but in the meantime he’s been talking me through filling out the online SSE form to get someone out to have a look at the house and tell me how much it’s going to cost to move the incoming power cable and the meter.  All submitted and they should get back to me in three working days, so fingers crossed it’s not going to be too expensive.  Dougie did get a fair bit done last week, we have another couple of holes in the house, one in the living room where the power cable will go out for a switch for the two floodlights that will illuminate the sheep fanks and one where the new mains power will come in.  The current one is only hanging on by the skin of its teeth! 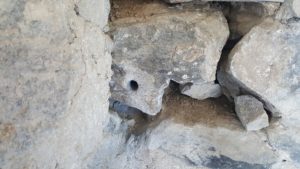 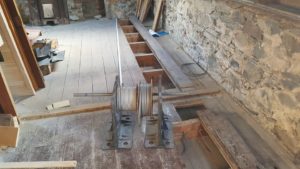 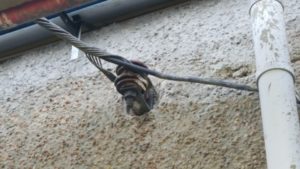 Actually, it’s no bad thing that he’s not here, because he really needs an accurate drawing of the kitchen units and it hasn’t been done yet.  Mick has a colleague at work who used to work for a kitchen company and still has the design software, so she’s very kindly doing it for us (I’ve asked him to find out what kind of cake she likes!).  David’s also been back working on his neighbour’s extension, so it’s just been Pete and his team working on the roof.

The sarking boards are all replaced where necessary and the slates are now going on.  James has set up a small slate-cutting workshop in the kitchen to hand-cut all the scalloped slates for the ridge row and the patterns. 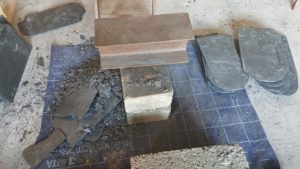 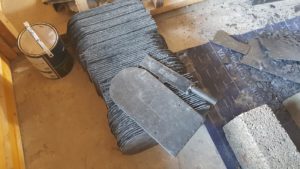 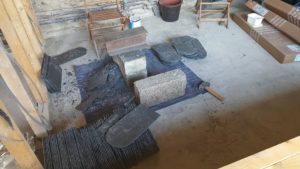 David realised he hadn’t asked us for enough wood, so the Rembrand lorry came trundling over with another 30 lengths and the guys now have a nice bench to sit and have lunch on. 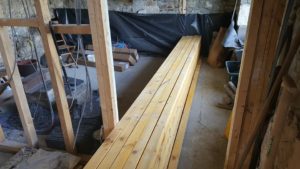 There are some replacement floorboards on the way from Allans of Gillock as well, but they’ve been a bit delayed due to the county show last weekend throwing out their delivery schedule.

Tomorrow I have to turn my attention to the fields again – we are forecast dry weather from tomorrow until Sunday afternoon, so John Angy and his tractor are coming up tomorrow afternoon to cut this little lot for me and hopefully we’ll get it turned on Friday and Saturday and baled on Sunday.  That’s the plan, anyway, let’s hope the weather gods are kind!  It also means I have until Sunday to clear enough space in the byres to store the baled hay with enough air around it for it not to combust and go up in flames.  I suspect I’m in for some hard physical labour for the rest of the week! 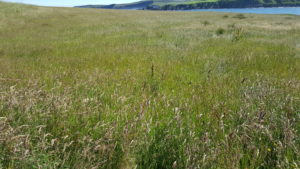