I had a fun time a week ago Friday being a chimney sweep assistant – two and a half tubs of soot were removed and Calum is very grateful that he’ll never have to sweep the kitchen chimney again.  Apparently it’s marginally less awkward without the Rayburn in front of it, but not much.  He ended up having to climb up on the roof and sweep downwards from the chimney and then went into it with a much smaller brush through the access hatch on the outside of the house, attached a drill to the end of the rods and power-swept it all the way down.  £70 for a job well done on all three chimneys!

I was away last week and hoped that David would have been able to start, but it’s all come to a bit of a grinding halt again and the only sign of progress is three rows of slates laid on one side of the roof and lots of holes appearing in joists and walls as Dougie tunnels his way through the structure of the house with his cable runs.  The roof can’t progress until the rooflights are resized and Dougie can’t get too much more done until the studwork is in.  However, we’ve managed to track David down and he says he’ll be on site probably Wednesday, might be Thursday (I’ve been told this probably means Thursday!).  If he can spend a couple of days sorting out the bits Pete needs him to do for the roof and putting the studwork in, then we can get quite a long way down the road before we need him back again – I think we’re then okay until we need him to lay the floor over the underfloor heating, as Mick is intending to do all the insulation fitting and plasterboard work himself.

It’ll be good for Mick to get cracking on it again, actually – he’s been loving working on this one so much, that he’s now gung-ho to do another.  And look what I saw online today… 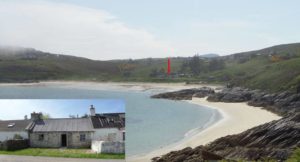 This is about 20 miles west of us, so not exactly just up the road, but it’s just over the road from one of the north coast’s prettiest beaches, Talmine.  It’s derelict, but someone has drawn up plans to turn it into a one-bed cottage and the asking price is £22,500.  I’m sure it’ll be snapped up by someone before we’ve finished this one and sorted out the finances for the next, but if I’m going to have a stable of holiday cottages, this would be a perfect addition.