We’ve had David for 2.5 days this week and he has finished pretty much everything he can do on the list – the remaining items need someone else to do something first.  However, he broke the news that he’s going to America for a couple of weeks at the beginning of December, which means in all likelihood if I don’t nab him for those jobs before he goes, I’m not likely to get him back until January.

Since there’s nothing like a deadline to focus the mind, Mick and I have agreed to put our collective feet to the floor and try and get the house completely finished by the end of November.  We’ve pushed on pretty well, with David’s help, and bits of it are now starting to look like a home rather than a project.

Painting the woodwork in the twin room while Ophelia lashes the windows.  The slate roof barely made a sound. 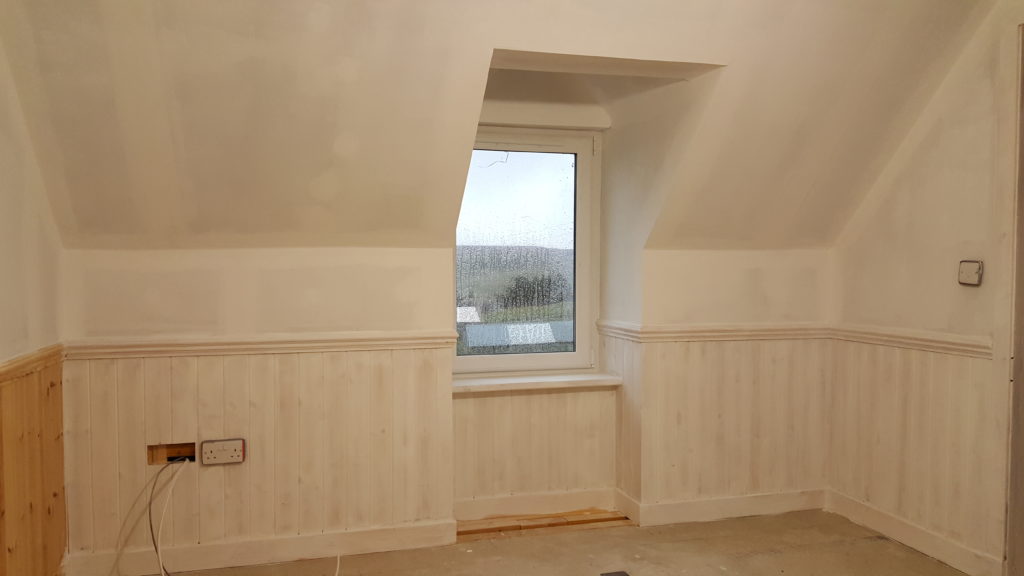 David has an incredible knack of taking my rather garbled description of something and making me exactly what I had in my head.  This little build-out hides where the underfloor heating pipes go into the wall and will be a useful shelf for keys etc. 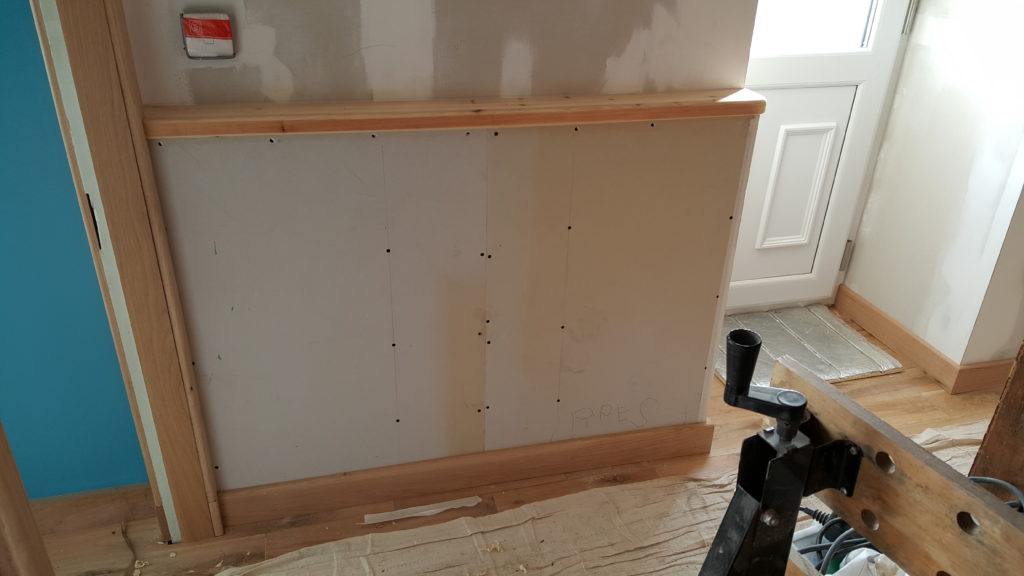 The kitchen became a workshop while the weather was so vile! 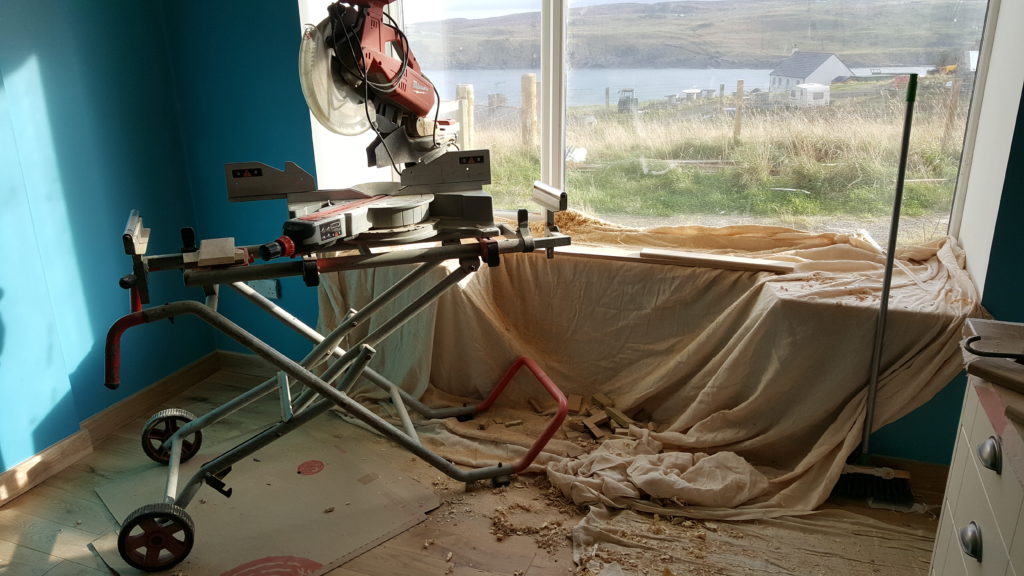 One thing Mick wanted David to do was a piece of wood putting into the top of the dormers – there was a thin piece sticking down between the plasterboard, which I’d tried painting, and it just looked awful.  This is much neater and will be painted white. 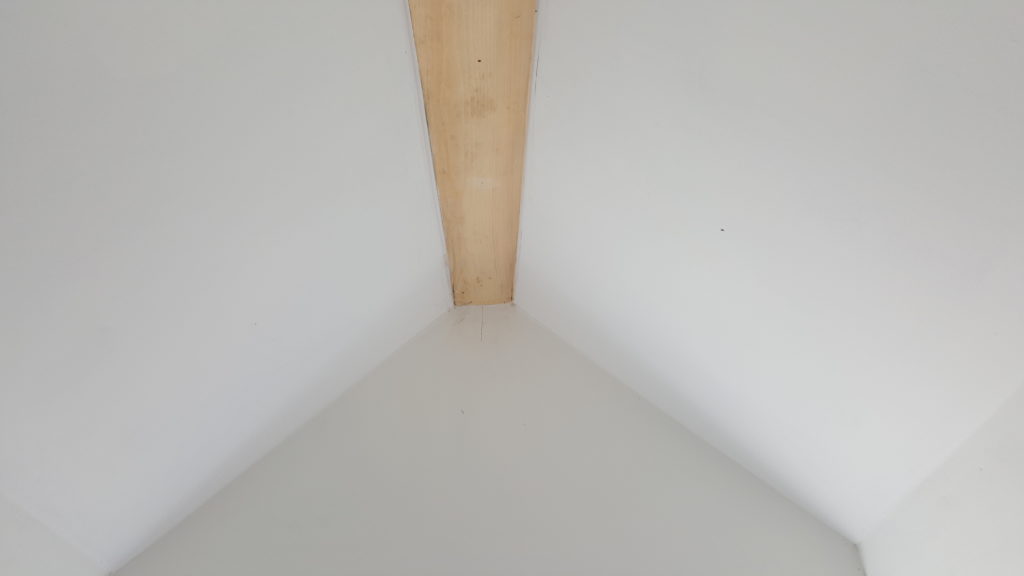 It’s amazing how much more finished the house looks with all the skirting boards and door surrounds in place.  We had a big tidy-up downstairs this morning. 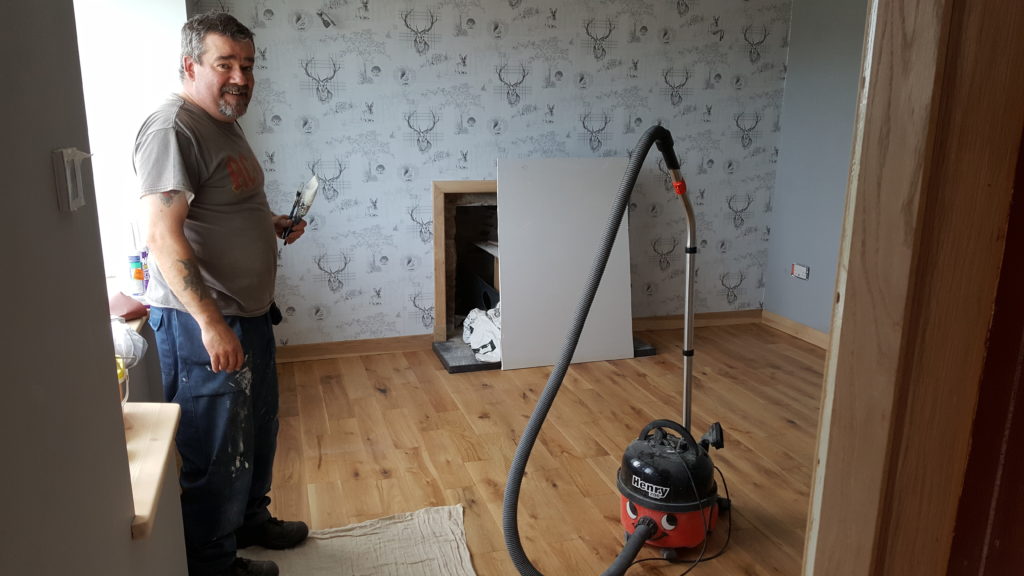 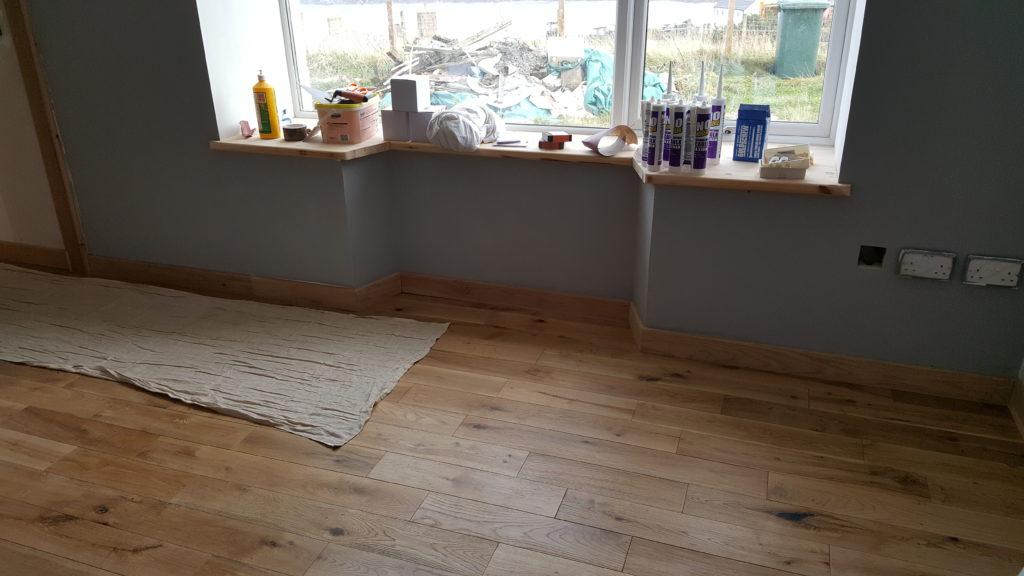 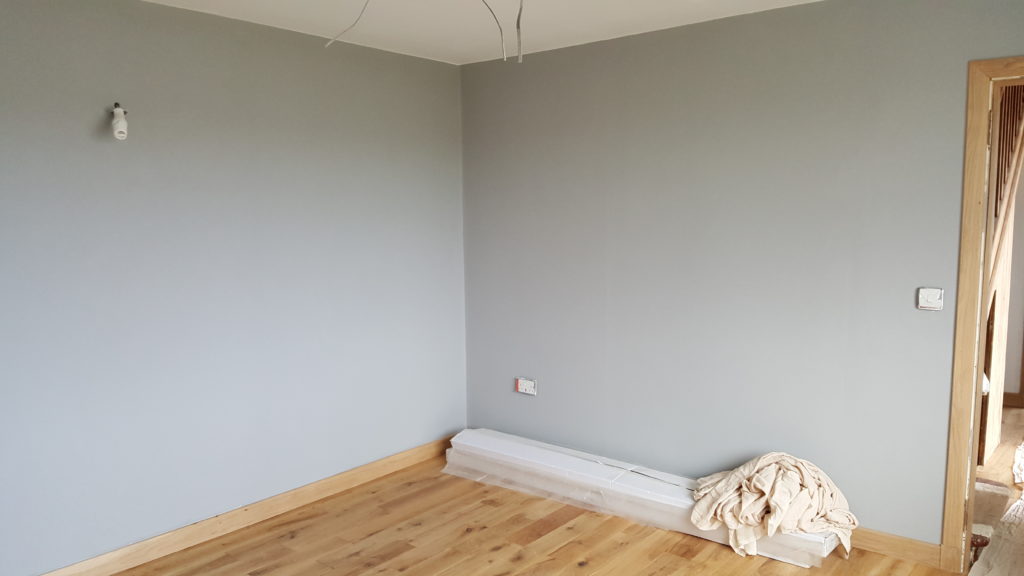 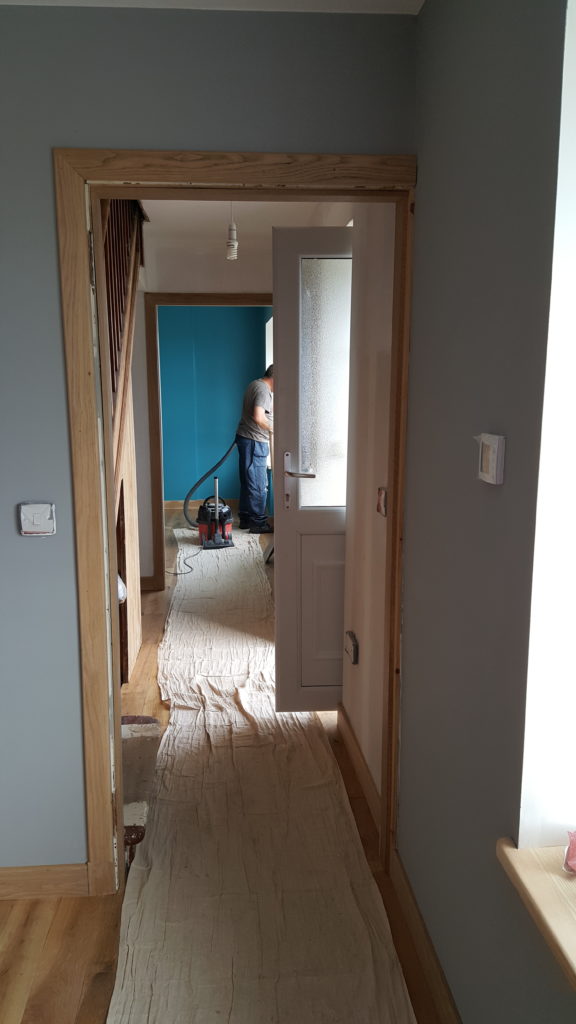 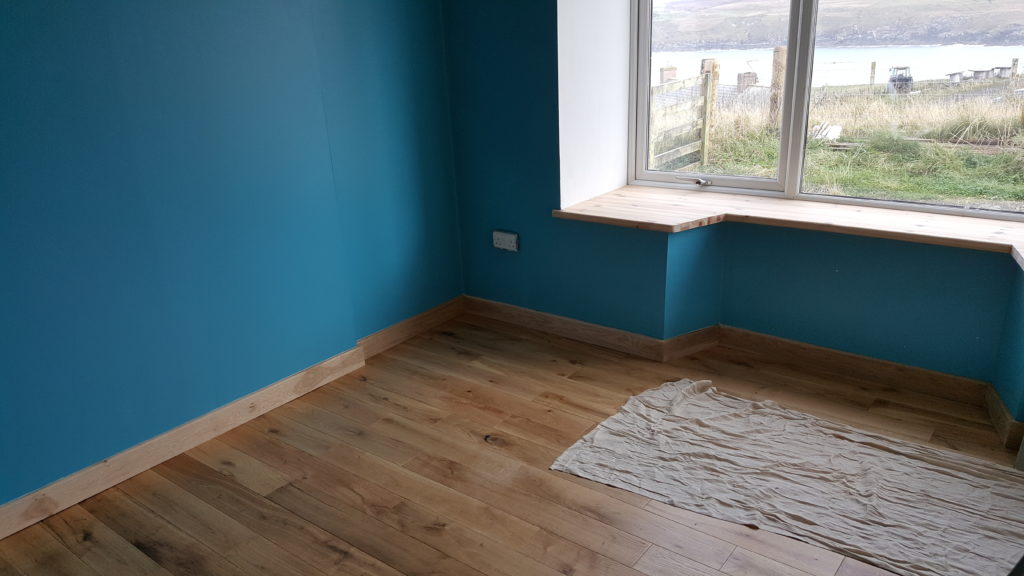 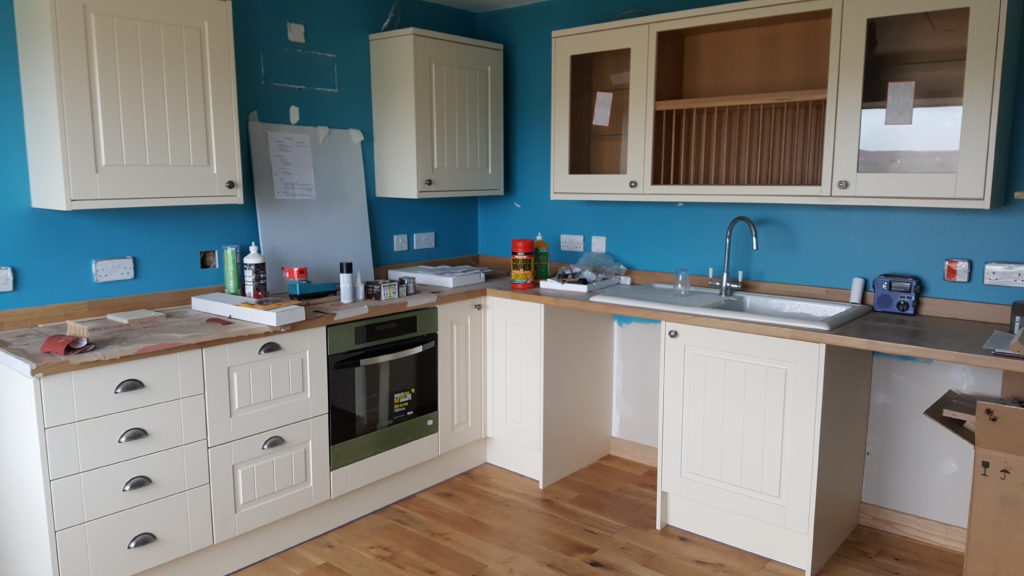 We took a deep breath and ordered the furniture yesterday.  The shopping list consisted of:

All of the furniture is solid wood and I had a feeling that I was probably going to have to shut my eyes when I handed my card over, but the total, after a very generous £297 discount, came to £5,200, so thank you Riverside Interiors!  We also spent £3,050 with them on the two leather sofas and a friend of Mick’s was selling a coffee table in the same range of furniture we’ve picked for £100, so that makes our total furniture spend to date £8,350.  Looking at our original budget, we’re £300 over on the wooden furniture and £1,950 over on the sofas, but we’d originally budgeted for fabric, not leather, before we were advised by the agency that leather would be better if we were accepting dogs.

We had a visit today from Alex, who’d come over to have a look at the area in front of the house and the garden so he could quote for sorting it out.  We need the whole area in front of the house scraping back, a weedproof membrane laying and then covering in gravel, bar a long strip about a metre wide to the right of the gate, which will stay as grass.  At the back, we’re having a gravel path put in along the back of the house and then the rest of the garden will have the top layer scraped off.  As we know from our own house, the problem with making a garden out of a field is that it’s always trying to turn itself back into a field.  In theory, if we scrape back deep enough, we should hoick out all the docks, thistles and other unwanted field pests.  Unfortunately we’ll have to fork out for some turf rather than waiting for grass seed to take, otherwise the photos are going to look a bit weird when it’s advertised, but at least it’s the right time of year for laying it.

Lots for me to do next week, and I have a list that would probably choke all three of my horses, but tomorrow’s first job is to try and give my sheep a contagious disease!  About a third of them have come down with something called pinkeye, a mild conjunctivitis, and I’ve been advised that it’s best to try and get them all to develop it and get it out of the way, as it normally clears up by itself in 6-10 days and after having it they build up an immunity to it.  So I shall be down the road in the morning to fetch the feed troughs and then holding the sheep equivalent of a chicken pox party!